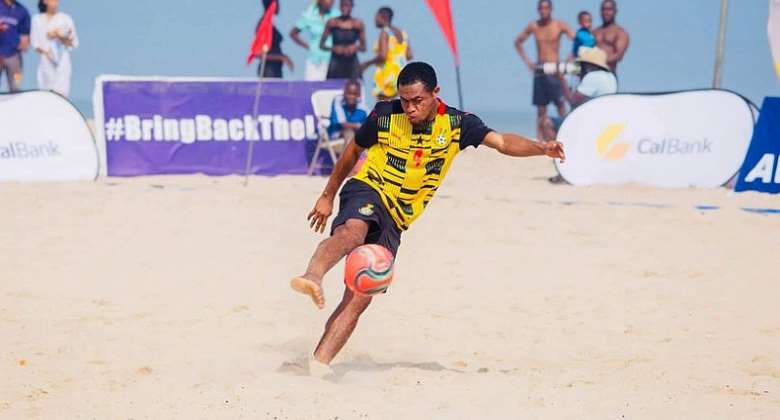 The Black Sharks of Ghana on Saturday, July 23, 2022, beat their counterparts from Egypt, the Pharaohs 6-5 in the opening qualifier of the African Beach Soccer Cup of Nations Championship.

The Laboma Beach Resort, the venue of the match was turned up into jubilation and merry-making after the referee had whistled for the end of the proceeding.

Certainly, the Egyptians prayed for a draw, but the beautiful goal in the late moment put them under. They will come all out in the return leg.

Ghana scored on each of the fastest goals when the game began by Kinni Ticor while Richard Osa also combined effectively with Michael Sema, Eugene Dekpey, and others.

Egypt are ranked 3rd on the continent with Senegal at first, Morocco placed second and Nigeria at fourth, while Uganda is fifth.

Ghana is ranked 11th and the recent victory will award them valuable points and respect.

"We have beaten Uganda Kenya and Egypt here at Laboma Beach, Ghana has never lost at home, we thank all our sponsors and supporters, Cal Bank, Ghana Tourist Board, and the media. We will go to Alexandria in Egypt and seal qualification," said Yaw Ampofo Ankrah, Chairman of the Ghana Beach Soccer Committee and the Black Sharks.

He is very optimistic that Ghana will move on and go very far. He called on other companies to support them and thanked CAL Bank and the GFA as well as the Ghana Tourist Board.

The match attracted a great fun-loving crowd at the beach. The Die Hard Supporters Union were fully represented. Congrats to the coach who was very strategic and influential.