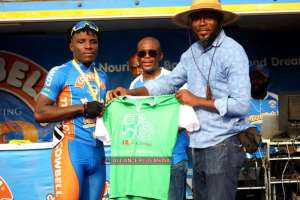 Team Boss Tribe's poster boy Frank Akuffo Awuku won the stage 4 of the Tour du Ghana which began from the Accra sports stadium through Ada to Sogakope and back to Ada.

He managed a bunch inclusion, saved energy and unleashed his final venom at the finishing of the race after a turbulent start.

The 30km demonstration publicity ride was somewhat uncomfortable as the road network along the Baatsona area through to the Nungua barrier township was terrible due to construction works ongoing.

The focus of River Park Brong Ahafo Cycling club in this very stage was to protect the leaders Jersey. They excellently succeeded in protecting their idol in the bunch till finish when they let him off to third place. A position which is likely to cement the yellow jersey holder a sure keep.

The bunch rolled into Dawhenya with full recovery amidst chants from spectators who obviously ignored church service to enjoy the peloton past by.

The wind was a big obstacle as many of the riders were already aware and had to adopt the usual pelotonic shields to occasionally issue some attacks.

Abdul Rahman Abdul Samed enjoyed over 20 minutes of the live coverage on the Facebook page of the Federation that was running live commentary on the race by breaking away from the entire bunch by almost 2 minutes but that display was shortlived as the workrate of the bunch behind him proved solid and eventually catching up with him.

The bunch entered into Ada like a flash of lightning and swept past the podium point into Sogakope and returned with intense heat.

Fidel Tchalem of Royal Cycling club is getting better by the day and managed a second position with Anthony Boakye coming third.

Rahman came fourth notwithstanding, a position that speaks well about his exploits in recent times.

Stage four combed an entire distance of 2hrs 58mins 58 seconds with an average speed of 41.1km/hr with 67 cyclists starting this stage.

Team Boss Tribe is certainly the best team at this stage and it will serve me as no surprise they maintain it to the end.

By some historical reference Anthony Boakye has equalled the records of veteran cyclist John Zormelo by getting decorated with both the green and Yellow jersey at a go.

The utmost interest in the yellow jersey is building up and it is astonishing to see on the log sheet Kako Justin of Team Sky as the next in contention. He is trailing behind Anthony Boakye by just an incredible close up chase time of 1min 38 seconds.

Boakye's nemesis Frank Akuffo Awuku, who has been a thinking worry to the River Park Brong Ahafo Team has been dissected off the yellow jersey by 3mins 28 seconds and by simple calculation the Sunyani based wheeler is tipped to keep the coveted leader's jersey.

Promasidor Gh, producers of cowbell products, BIC,producers of BIC Pens and shavers, Riyard Constructions, dealers in all housing projects, S-Sports, Liteblue events, quality events organizers and Iqrat Ltd, experts in the maintenance of all heavy duty trucks cannot be left out of this huge success in this fourth stage.

The ultimate hanger will be settled at the Ablekuma Olebu stretch and that promises to fireworks as the final intentions of the various jersey holders would be at play.