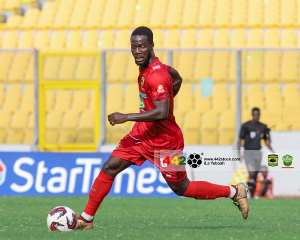 Annor emerged as the 2021/22 top goal scorer with 22 goals to equal Heart of Oak legendary striker Ishmael Addo's record in the Ghanaian top-flight league after 21 years.

He was ranked 7th on the Federation of International Football Association's (FIFA) list of players with the most goals from the start of 2022.

However, Boadu in an interview stated emphatically that Annor's goals were fixed by some Premier League clubs.

“I'll pick Franck Mbella Etouga as my best player in the just-ended season. Yaw Annor is another stubborn striker, who runs a lot on the field whenever he is with the ball, ” Boadu told Kumasi-based radio station Wontumi FM.

“For Yaw Annor, I'll say some of the Ghana Premier League clubs played soft with AshantiGold SC for him to score,”

“I'm telling you the truth, some Premier League clubs played soft games with AshantiGold SC for him [Yaw Annor] to score to increase his goal tally," he added.

“There were some goals which you could see that the goals were manufactured” he added.

Boadu has established himself as a key member of the Asante Kotoko after joining them from Medeama SC before the start of the 2021/22 Ghana Premier League season.

Annor, meanwhile, is expected to join a club in Egypt in the coming days.

'Forgive me if I was wrong to spearhead renovation of Asomdw...
40 minutes ago