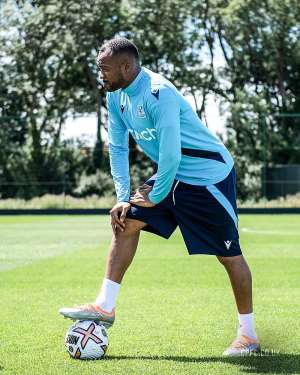 Crystal Palace players who were involved in international football over the summer including Ghana striker Jordan Ayew have returned to the Academy ground to start pre-season.

Ayew featured for Ghana in the 2023 Africa Cup of Nations qualifiers against Madagascar and Central African Republic as well as participating in the 2022 Kirin Cup in Japan.

The 30-year-old trained with his teammates together for the first time as they gear up for the new season which kicks off in August.

He has penned a new deal that will run till June 2023. The former Aston Villa man has enjoyed a great stay at Palace during his three seasons with the London club.

He finished as the club’s top scorer in the 2019/2020 season and was named as their player of the season that same year.

Ayew, since arriving in the Premier League from Marseille in 2015, has featured for Aston Villa, Swansea now Crystal Palace.