Hearts of Oak: We will not concede six in Africa again - Samuel Boadu 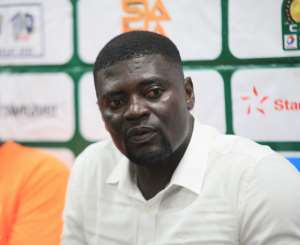 Hearts of Oak coach, Samuel Boadu says his side will not be humiliated in Africa again.

The Phobian Club were hammered in the Africa campaign last season having won the domestic treble.

Boadu said his team conceded six against 2021-22 CAF Champions League winners Wydad Athletic Club because his players were inexperienced in the competition.

According to him, his players are well exposed in the interclub competition in Africa and will not concede goals for fun again.

Ahead of the CAF Confederations Cup campaign next season, the former Medeama SC boss is confident his side will improve.

“I don’t think we will concede 6 goals in Africa again. The boys are now exposed," he told Asempa FM.

Due to their Cup triumph against the Hunters, the Phobians will represent Ghana in Africa.

Hearts were beaten 6-1 in Morocco against Wydad Athletic Club in the playoffs of the CAF Champions League and subsequently lost 4-0 to JS Sauora in the Confederation Cup last season.