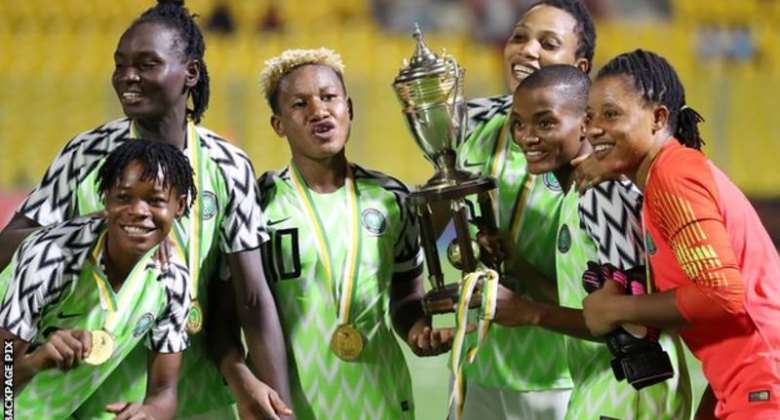 The Women's Africa Cup of Nations (WAFCON) returns this month after a four-year absence, with what is arguably the continent's biggest women's sports event expanded to accommodate 12 teams.

It will be hosted on North African soil for the first time by Morocco, with the games played across three venues in Rabat and Casablanca from 2-23 July.

Nigeria lifted the trophy in the past three editions and have triumphed nine times in 11 previous WAFCONs, and the continent's highest-ranked side are still the team to beat.

Cameroon and South Africa are among their closest challengers, but with four countries making their debuts there could be surprises over the next three weeks.

In 2018, Thembi Kgatlana won Player of the Tournament and the Golden Boot with five goals as Banyana Banyana were beaten on penalties in the final by Nigeria, and the Atletico Madrid player believes the game is progressing across Africa.

"A couple of years ago we would have argued that it's just Nigeria, South Africa and Cameroon making strides in women's football but to make it a 12-team tournament is amazing," the 26-year-old told BBC Sport Africa.

"We are showing more countries that they need to invest in women's football, so that we can even get to a higher level. The objective is to make sure that women's football grows."

Known for their measured control of games from the first blast of the whistle, Nigeria remain heavy favourites to win a record-extending 10th African title.

One of just four sides returning from the 2018 finals, coach Randy Waldrum's team will have to navigate a tricky Group C opener against arch-rivals South Africa before taking on debutants Botswana and Burundi.

The Super Falcons are boosted by a heavy blend of foreign-based internationals, including Barcelona's four-time African player of the year Asisat Oshoala, who topped this season's scoring charts in Spain, as well as fellow forward Macleans Chinonyerem, who led the way in Poland.

Hot on their heels are South Africa, who have reached the final four times but have lost twice apiece to both Nigeria and Equatorial Guinea, the only other side to have ever lifted the trophy.

Forwards Ajara Nchout and Gabrielle Onguene, named best player at the 2016 WAFCON, are set to be key for Cameroon

Cameroon complete the trio of favourites and, like Nigeria and South Africa, have competed in all the editions of the WAFCON since it began in 1998.

The Indomitable Lionesses hosted the 2016 tournament, narrowly losing to Nigeria in the final, and have slowly rebuilt after former captain Christine Manie and Gaelle Enganamouit retired.

The central Africans will have 19 players making their tournament debut, but the more experienced Inter Milan striker Ajara Njoya Nchout and CSKA Moscow star Gabrielle Onguene will look to lead the team to glory.

Meanwhile, the rise of Morocco has caught the eye, with the hosts making enviable strides over the past two years as part of a strategic four-year plan laid by the Moroccan Football Federation.

Key to this turnaround is French coach Reynald Pedros - a two-time European Women's Champions League winner with Lyon - who has hit the ground running since his appointment by the Atlas Lionesses in 2020.

Known for their flair and pace, the North Africans draw heavily on the nationally-dominant club AS FAR, with Ghizlane Chebbak and striker Sanaa Mssoudy among their key players.

A record 44 countries entered qualifiers to bid for a place in Morocco, with the added carrot of a potential ticket to the World Cup.

The four semi-finalists will all be assured of spots in Australia and New Zealand next year, with beaten quarter-finalists playing off for two spots in a 10-team intercontinental tournament which will decide the final three qualifiers.

South Africa's Kgatlana is pleased that the World Cup's expansion from 24 to 32 teams has resulted in more slots for Africa, but she is wary that every team at the Nations Cup will have added motivation as a result.

"It's important that when you go to this tournament, you do not underestimate anyone because everyone is looking for those four tickets to go to the World Cup," Kgatlana said.

"I think I'm most happiest because it was a struggle before, as we only used to have three tickets to the World Cup. Now there's one extra, which means it could be anyone."

The winners of the WAFCON will take home prize money of $200,000 while the four semi-finalists will be certain of $750,000 next year for appearing at the World Cup.

After the 2020 edition of WAFCON was cancelled because of the coronavirus pandemic, a new generation have a chance to make a name for themselves on the continental stage.

Tunisia's Mariem Houij scored the joint-most goals during the African qualifiers as her six strikes ensured a third finals appearance for the Carthage Eagles after a 14-year absence.

Rukiya Bizimana of Burundi, who plays for Etoile du Matin, was just behind Houij after netting five goals for the Swallows.

Star player Barbra Banda had been expected to be key for Zambia, with the 22-year-old hitting global headlines at the Tokyo Olympics last year as she became the first player ever to score successive hat-tricks at the Games, but she was ruled out of the tournament on Friday for medical reasons.

2021 doctor of pharmacy class to withdraw services over dela...
58 minutes ago