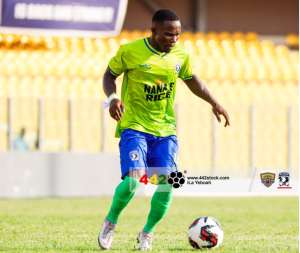 The former Asante Kotoko winger has signed a two-year deal with the club and he is expected to leave the shores of the country in the coming days.

The 28-year-old who was the livewire of the Hunters helped them finish third in the Premier League and runners-up in the MTN FA Cup.

However, Okrah is expected to join the club for the Tanzania side next season.

Okrah who started his career from the Bechem-based side is not new to the African continent as he has previously played Al-Hilal club and Al Mirrekh.

He has also played for NorthEast United in India and played on loan to BK Hacken as well as Liberty Professionals and Asante Kotoko.

He was in action as his Bechem United lost to Hearts of Oak in the MTN FA Cup final at the Baba Yara Stadium over the weekend.