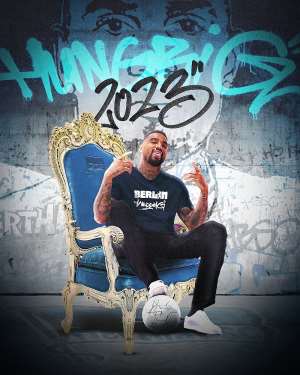 Ghana forward, Kevin-Prince Boateng has disclosed that he is excited after signing a new deal to continue playing for Hertha Berlin.

The German Bundesliga club on Wednesday, June 22, 2022, officially announced that a deal has been reached to retain the services of the veteran forward for one more year.

“Back home: last summer, Prince Boateng made a return to his old stomping ground, back to where it all started for him 28 years ago. Today, that return continues – at Hertha BSC! Berlin-born Prince has extended his contract until June 2023 and will don the blue and white of Hertha next season,” an official club statement has said.

Speaking to the club after inking the deal, KP Boateng stressed that he is feeling good and looking forward to the 2022/23 football season with his beloved club.

“I’ve always said how special and valuable this club is to me and tried to show it both off and on the pitch. I feel good, I’m hungry to get going and excited to keep going forward with the lads,” the veteran forward indicated.

Already, KP Boateng has joined his teammates at Hertha Berlin where pre-season training is underway.

The team is eager to improve on the performance from last season when the new campaign commences.