Corruption 'eating away' at football in World Cup-bound Tunisia 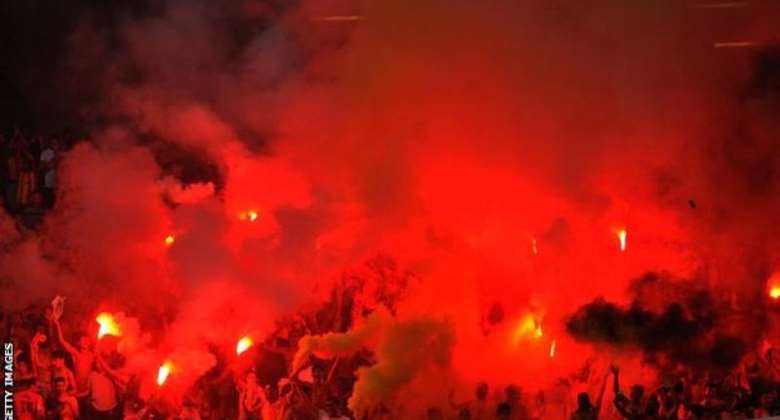 Corruption is "eating away" at football in World Cup-bound Tunisia, the president of a team at the centre of a match-fixing scandal has told the BBC.

Aly Oueryemmi presides over ES Zarzis, who were recently relegated from the country's top flight amid controversial scenes.

Zarzis' 1-1 draw with ES Hammam Sousse, which was enough to relegate rival side ES Metlaoui, ended in five-year bans for two Zarzis players while creating another storm in Tunisian football.

"There is no fair play nor equal opportunity in Tunisian football - either when it comes to referee or match assignments. There are certain referees that are assigned to manipulate matches. There are unjust referees and controversial results.

"Results in Tunisian football have never been honest and truthful."

BBC Sport Africa has sought comment from the Tunisian Football Federation (FTF), which is responsible for assigning referees to matches, but has not received a response.

The relegation of Zarzis, who Oueryemmi describes as a "victim" of corruption within Tunisian football, came after a four-team play-off to determine which two sides would stay in the top division.

The series proved so controversial that the FTF has since ordered another game to be played.

The match is scheduled to take place on Wednesday, although one of the teams supposed to participate has previously said it will not play.

Domestic football in Tunisia has been plagued by problems recently but the national team, off to the World Cup, won the Kirin Cup earlier this month

"Let him score! Let him score!"
These were the shouts heard in a video widely circulated on Tunisian social media during the relegation match between Zarzis and Hammam Sousse in late May.

To give context to the events, the relegation from Tunisia Ligue 1 was to be determined after a mini-tournament featuring Zarzis and Hammam Sousse as well as ES Metlaoui and Olympique de Beja.

Deep into added time on the final day of the round-robin league on 29 May, with all four teams in action, Metlaoui and Olympique de Beja - who had just drawn - were safe since Hammam Sousse were trailing 1-0 at Zarzis.

But with 100 minutes on the clock, everything changed as Sousse found an equaliser after Mossaab Sassi was given the freedom of the penalty area to dribble forward and fire home without a challenge against him.

With the new twist, Olympique de Beja and Hammam Sousse would remain in Ligue 1, while ES Metlaoui would be relegated to Ligue 2 alongside ES Zarzis.

The shouts of "let him score" are believed to be from Zarzis fans after they said they had been mistreated in their game against Metlaoui just three days earlier.

As the video spread throughout Tunisian social media, ES Metlaoui fans were outraged and accused ES Zarzis of intentionally forfeiting the match to favour Hammam Sousse.

Riots broke out in the south-west town of Metlaoui, where workers halted phosphate production in one of the country's biggest factories and the local labour union spoke out about "rising tensions within the city that were threatening local peace".

"We're talking about a scandal - match-fixing - and this isn't only about the teams. This is a corrupt system," Mohamed Dinary, the Metlaoui president, told a local radio station shortly afterwards.

The day after the game, the FTF stated it had "written to Fifa's ethics and disciplinary committees about the events that unfolded during the game... asking their support to investigate the matter and take proper action".

FTF has also called on the match referees and officials to give their reports on what went on.

"The FTF statement is a joke, the match was a joke, and the result was a joke," added Dinary.

On 10 June, the Zarzis goalkeeper and right-back were handed five-year bans and fined 50,000 dinars (US$16,000) for their role in the goal by the FTF, who later said the decisions were taken to "maintain football integrity and fair play".

Once again, this provoked fury from Zarzis representatives.

"The decision has no legal basis whatsoever," Oueryemmi said.

"We are a big, respectable team that always plays ethically and every other team can vouch for this.

"For the last 10 years, there have been issues with referees, stadiums, fans and different problems, but the FTF wanted to pin all that on ES Zarzis, thinking we are a small team they can use.

"The FTF sacrificed Zarzis through results and now wish to tarnish our reputation. We will not be used as a scapegoat, and will not have our team's name dragged through the mud."

Zarzis' secretary general Salem Natahi believes the club was picked up by the FTF owing to its relatively small stature as well as geographic distance from Tunis, where the FTF is based.

"We don't have media outlets working for us, we're 600 kilometres from the capital and the federation wanted to use us as a scapegoat," Natahi told BBC Sport Africa.

The FTF has since ruled that while Zarzis' relegation has been confirmed, a play-off match should be played between Hammam Sousse and Metlaoui - with video assistant referees to be used and with the loser dropping down a division.

Hammam Sousse responded by saying the FTF decision lacked a "legal basis" - a viewpoint with which Zarzis agreed - while Metlaoui have said they will not contest the match.

"We refuse such improvised decisions and refuse to play any game," a Metlaoui statement said in response.

The FTF has said Wednesday's match will be awarded as a walkover to Hammam Sousse if Metlaoui have not shown up within five minutes of the designated kick-off time.

Zarzis goalkeeper Wael Kordi, meanwhile, has been incensed by the FTF's decisions.

"A five-year ban and a 50,000-dinar fine for conceding a goal from a one-on-one situation is unfair - any goalkeeper can concede that goal.

"I concede a normal goal and I find myself accused of match-fixing, this is shocking and unfair. On what grounds was this verdict made?"

Tunisia's football season has ended as it began, with a club crying foul of the way in which the sport is run.

Prior to the season, Chebba FC took their case to the law courts to argue against a demotion to the lower divisions which they described as a "punishment" for having criticised the FTF in late 2020.

Chebba won their appeal at the Court of Arbitration for Sport, and were later voted back into the top division by their fellow clubs.

Later this year, Tunisia - the first African team to win a match at the World Cup, in 1978 - will hope to finally reach the knock-out phase as they contest their sixth finals, in Qatar.