Wimbledon: Anderson warns of disconnect between players and Grand Slams 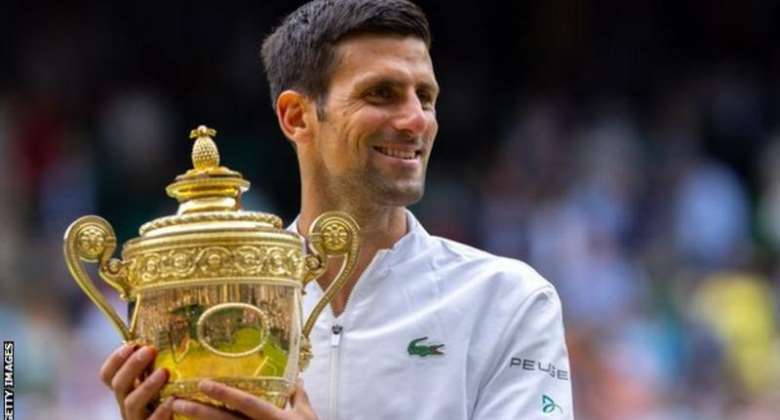 Defending Wimbledon men's champion Novak Djokovic will lose the 2,000 rankings points he secured when he lifted the trophy last year

Tennis must resolve a disconnect between players and Grand Slam events which has been highlighted by the sport's reaction to the war in Ukraine, according to Kevin Anderson, the head of the ATP player council.

Wimbledon chose to ban Russian and Belarusian players following Russia's invasion of Ukraine, which led to the ATP and WTA stripping the event of ranking points.

Some high-profile players, including Naomi Osaka, have subsequently questioned whether it is worth them competing at the tournament in London, which begins on 27 June.

Meanwhile, the US Open has followed the French Open in allowing players from the two countries to participate in the tournament in New York, but under a neutral banner.

Former world number five Anderson, who retired from playing last month, has been involved in discussions to resolve the impasse between players and Wimbledon.

"I think it's important to have a better relationship between Grand Slams and players," the 36-year-old told BBC Sport Africa.

"As players sometimes you feel like Grand Slams act a little bit independently. As much as I can understand Wimbledon's decision and some of the reasons, moving forward there needs to be better communication between these entities and the players.

"Taking (ranking) points away is unprecedented."
The South African admits the sport is dealing with an "incredibly difficult" and "unfortunate" situation after Ukraine was invaded by Russia in February.

New men's world number one, Daniil Medvedev of Russia, will be absent from Wimbledon as a result of the ban, and the stripping of rankings points may further affect the strength of the respective fields in SW19.

Four-time major winner Osaka questioned her involvement last month, saying "if I play Wimbledon without points, it's more like an exhibition" after her first-round defeat at the French Open.

However, seven-time Wimbledon winner Serena Williams has been handed a wildcard as the 40-year-old seeks her 24th Grand Slam.

Anderson is sympathetic to both sides of the issue having talked to Ukrainian players - with former world number 31 Sergiy Stakhovsky among those who have joined the forces defending the country.

"Speaking with a couple of the players who I've known, you almost feel a personal connection. It's obviously terrible and I think any things that can be done to try and help end it is really important," Anderson said.

"That's why I can understand Wimbledon's position, given the significance of the event. On the flip side, it's tough as players.

"Now we're in a position where there's a lot of players who won't be able to even play for points. I don't think there'll ever be a fully correct answer. Just in the council there's been a lot of different opinions of what to do.

"But I think one of the biggest things that is important for the players is to have a little bit more say at the decision-making table, especially at the slams.

"Wimbledon's one of the most iconic tournaments in the world. Everybody wants to try figure out a solution."

Anderson is still president of the ATP players council despite his retirement, although he is expecting to vacate his role in the future.

"When I retired, I let the council know, and was saying: 'If I'm not there, it's probably time for me to step off'. But we saw that even though I'm not on the tour, the amount of time I've spent with all these different topics [has given me] a lot of experience.

"So I was like, 'I'd be happy to continue and provide as much help and advice that I can'. I'm always passionate about helping the players and so even though I'm not actively playing, I'm still involved, at least for this next little while trying to still give the players a voice and still push their agenda."

Bawku Conflict : NMC cautions against "weaponization" of med...
11 minutes ago