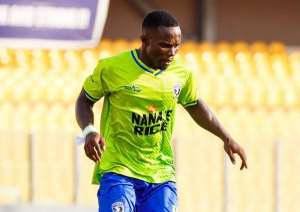 According to reports in the local media, the former Kotoko winger is expected to ink two a year deal with the club.

The 28-year-old has been phenomenal since joining the Hunters from the Porcupine Warriors before the start of the 2021/22 Ghana football season.

Okrah has netted 14 goals in 31 appearances for Bechem United.

He has also helped the club to reach the MTN FA Cup where they will face Hearts of Oak.

Okrah is expected to move to Tanzania to begin his adventure with Simba after the FA Cup final.

Okrah has previously featured for, BK Hacken and Sudanese sides Al-Merrikh and Al Hilal where he won the Sudanese Premier League and FA Cup trophies.