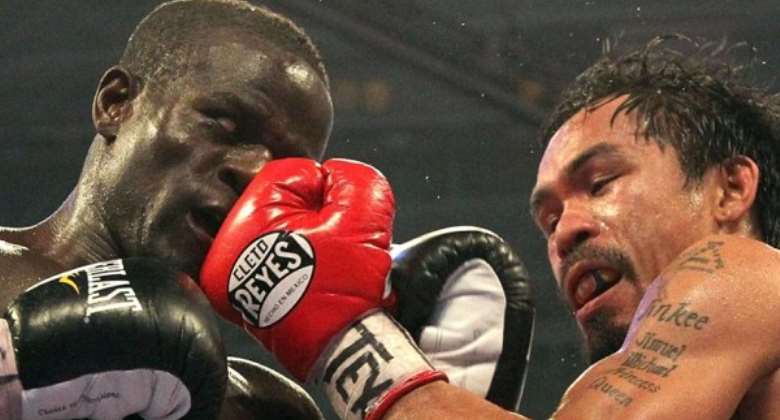 At the time, it was widely reported in the Ghanaian media that Clottey lost the fight because of multiple stomach aches and diarrhea after consuming banku and okro stew hours before the fight.

However, the boxer says this was not the only reason for being dominated by the Filipino legend.

Speaking to GraphicOnline in an exclusive interview, Clottey revealed that what weighed much heavier on his mind during the fight was the percentage split of his $1.3million prize money with his then manager Vincent Scolpino. In addition to this, Clottey said he was also paying his cutman, second trainer, and taxes from the same winnings.

He said the fact that his manager was going to pocket 33percent of his purse put him off exchanging punches with Pacquiao during the fight.

"I told the reporter that I ate okro stew before the fight and you can ask Majid Michel, he was with me at the fight," Clottey told GraphicOnline in an interview to be aired on June 11, 2022.

"Ask Majid Michel, if he wasn't the one who took me to the bathroom for the last time before they called me to the ring. We went to the bathroom and I threw some up. It might weaken you but it's not because of that.

"The main story about the fight is the 33% split with the manager. I fought for many weeks before they added something to make it and the percentage was beating me every time before I go to the ring and I couldn't continue like that".

Clottey said he dragged Scolpino to the Athletic Commission in an attempt to review the percentage downwards but lost because "I am an African".

"He (Scolpino) was doing nothing for me, but just taking 33percent. It's going to weaken the brains, body, and soul of every person in that position".

Clottey said Scolpino refused to reduce his percentage to 25percent in the hotel before the Pacquiao fight, he made the decision to protect himself from injury.

"I fought for just the first two rounds and defended for the remainder".

Clottey who has regrets about his approach also admitted that he went into the fight with the wrong mindset.