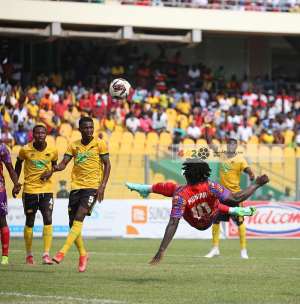 For so many years, it seems as though getting a call up to the Black Stars as a Ghana Premier League (GPL) player is a myth, a miracle or perhaps the greatest achievement in one’s career.

A lot of the high performing GPL players rarely get the opportunity to display their quality on the international stage. Handlers of the senior national team always look to prioritize the foreign based Ghanaian players over the locals when it comes to international tournaments.

In situations whereby two or three local players are invited for a tournament, they barely or in fact never get a place in the matchday squads until the competition is over. The impression created is that; GPL players are not good enough to have playing time in comparison to the foreign based players.

This has been the picture painted in the minds of many football fanatics in Ghana which in effect doesn’t augur well for the development of our league. Players perform exceptionally well in GPL with the hope of securing a deal abroad in order to get a somewhat easier chance of playing for the national team.

A lot of players have accepted the notion that as long as they continue to play for any of the local clubs, they may never get the opportunity to represent Ghana at any international tournament. Therefore, they will rather put in even more effort to get a transfer outside the shores of Africa and pen down a contract with a foreign club.

This immediate exodus of players every time does not only affect the development of the players, it also affects the quality of our local league. The clubs are unable to keep hold of their best players over two seasons simply because of the lack of funding and assurance to get the players in the Ghanaian national team.

The irony of all of these is that we see other African players get call ups into their respective national teams whiles playing for a GPL club. The question that comes to mind is; why can’t local Ghanaian players enjoy same opportunities with our Black Stars? Why does getting a national team call up always seem like a tall mountain to climb for GPL players?

Surely, something drastic must be done to filter the minds of fans and players alike to believe that players are called to the Black Stars based on performance and not connections or favouritism.

The recent media reports of Bechem United player Augustine Okrah refusing to join Black Stars camp in Japan for the Kirin tournament alludes to the notion that local players are probably not treated rightly. Many people are wondering why a local Ghanaian player would reject a Black Stars call up. An opportunity so many other players both home and abroad are craving for.

It's about time coaches of our flagship national team see the potential in the local players and actually give them the opportunity to play and not turn them into regular spectators on matchdays. The fact is; playing professional football outside Ghana does not necessarily make one a better player than the rest here. The vice versa is also true.

It’s so difficult to understand why GPL players invited to the Black Stars camp rarely get playing time in international friendly matches. If the players are not given the chance to play any minutes at all, why are they selected in the first place? Are they included just to appease the cry of the local fans?

The Ghana Football Association’s prime advocacy of “Bring Back The Love” can only be achieved when every well performing Ghanaian player, whether home or abroad is given equal opportunity in our national team. There must be an end to the inferiority complex and for want of a better word ‘discrimination’ against local players.