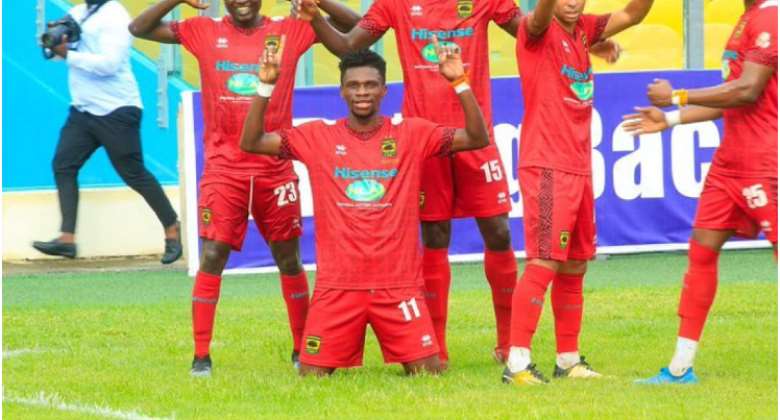 Asante Kotoko delivered yet another great performance to beat Accra Great Olympics 1-0 on Match Day 32 of the Ghana Premier League at the Accra Sports stadium on Sunday.

The Porcupine Warriors went into the game as League champions having defeated Medeama SC 2-0 in midweek to take a commanding 9 points to lead at the top of the table with three games to spare.

Franck Mbella Etouga scored the match-winner in the 69th minute - his 21st goal of the season to give Asante Kotoko superiority over Great Olympics having won 2-0 in the first round of the season.

Great Olympics were explosive in the first half looking to end-run of poor results in the League but Kotoko goalkeeper Kwame Baah stood between them and a goal as the half ended goalless.

Baah made excellent saves to deny Varney Sando and Ibrahim Sulley before saving a well-struck free-kick from Raymond Grippman to keep his side in the game.

After the break, Kotoko took the lead thanks to a spectacular strike from Etouga in the 69th minute.

Olympics fought back gallantly in search of the leveler, but it wasn't enough to earn a point, as Kotoko held on to win the contest.

The win takes Asante Kotoko to 63 points - 10 points clear at the top of the table – awaiting their day of glory next week when they host Elmina Sharks in Kumasi.

In other matches, Ibrahim Abdallah scored in the 11th minute to give Dreams FC a 1-0 win against AshantiGold SC at the Theatre of Dreams at Dawu.

At Bibiani – Gold Stars were shocked by WAFA in a seven-goal thriller as the Academy boys came from two goals down to win 4-3 at DUN’s Park.

But after the break, WAFA turned on the heat on the hosts and won a penalty which was converted by substitute Marvin Owusu.

Emmanuel Agyemang Ofori pulled them level on 70 minutes and just a minute later they were in the lead for the first time. Teenager Emmanuel Intori stepped up and found the back of the net to make it 3-2 for WAFA – a rare away win this season.

Elsewhere – Karela United FC were simply unstoppable as they put five past Real Tamale United at CAM Park. Captain Umar Bashiru and Samuel Atta Kumi scored a brace each to ensure they whitewash the Tamale lads 5-1 at home.

Bashiru opened the scoring from the spot in the 33rd minute – his 13th of the season before Mathew Kelvin Andoh doubled the lead for the home side before the break. The former Asante Kotoko man increased the tally again in the 78th minute as Hedir Mohammed pulled one back for Real Tamale United after connecting from a cross in the 82nd minute.

Atta Kumi scored twice in quick succession – 85th and 90th minutes to complete the rout for Karela United who moved to 4th in the table.

King Faisal left it late to beat Accra Hearts of Oak following a 1-0 win at the Baba Yara Sports stadium.

Richard Akrofi scored in added time with an easy tap-in to secure the points for King Faisal to move them five points clear of the drop and also bringing to an end Accra Hearts of Oak’s seven-match unbeaten run.

Also, Techiman Eleven Wonders shared the spoils with Legon Cities in a goalless draw at the Ohene Ameyaw Park at Techiman.

Second-placed Bechem United rallied to a 1-0 win against Aduana FC at the Fosu Gyeabuor Park. Augustine Okrah scored the match-winner – 14th of the season - inside 16 minutes to inspire his side to an amazing over regional rivals and two-time winner Aduana FC.

At Elmina – a brace from Ansu Kofi Patrick and Kwesi Donsu propelled Medeama SC to a 3-1 win against relegated Elmina Sharks at the Nduom stadium. The visitors took the lead as early as the 2nd minute and wasted no time adding the second goal in the 11th minute – a brace from summer signing Ansu Patrick. Kwesi Donsu added the 3rd goal in the 45th minute – a few seconds before the break. Francis Oteng pulled one back in the 56th minute but it was too little too late to save them from another home defeat.

Earlier on Saturday, Accra Lions humbled Berekum Chelsea 2-0 at the Accra Sports stadium. Remember Adomako Boateng shot Lions into the lead in the 29th minute before Hagan Frimpong fired home an absolute beauty after connecting latching on to a neat pass from Seidu Basit to make it 2-0 for the new boys.