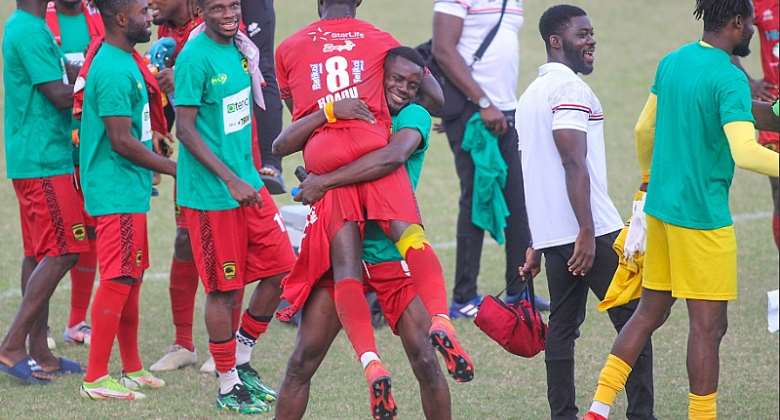 Ten-man Asante Kotoko cruised to an exhilarating 2-0 win against Medeama SC in their Match Day 31 Ghana Premier League tie at Akoon Park in Tarkwa on Sunday.

The win gave the League leaders a record - first win over Medeama SC in eight years to put their title hunt back on track.

Asante Kotoko scored two first-half goals through Andrew Appau and Mbella Etouga to down the Mauve and yellows.

The Porcupine Warriors came into the game fresh from a home defeat to Berekum Chelsea but it took them only 23 minutes to shoot into the lead in Tarkwa as Appau soared above everyone to head home a corner kick from left-back Ibrahim Imoro.

A few minutes later, Etouga fired home the second goal after he was set up by Mudasiru Salifu.

The Cameroonian attacker rounded the Medeama SC goalkeeper before slotting home a few minutes to halftime.

Midfielder Mudasiru Salifu was later red-carded after receiving a second yellow card as Asante Kotoko held on to take a 2-0 lead into the break.

Coach Prosper Ogum came back from the break bent on maintaining good composure and resilience to keep hold of the two-goal advantage and that paid off as his team rebuffed attempts by Medeama SC to get back into the contest.

The Reds had goalkeeper Danlad Ibrahim to thank as he pulled some spectacular saves to prevent Medeama SC from scoring as the Porcupine Warriors held on to win 2-0 in difficult terrain.

The victory puts Asante Kotoko nine points clear at the top of the table with 59 points – with a game in hand. Bechem United (50), Medeama SC (50), and Accra Hearts of Oak (47) follow in 2nd, 3rd, and 4th respectively.

Elsewhere, there was drama at the El Wak stadium where Michael Enu scored late to deny Legon Cities the maximum points at home. Augustine Dosu had given the Royals the lead in the 86th minute after the Gold Stars' defense failed to clear their lines with 4 minutes of proceedings remaining. With the game heading the way of Legon Cities, Enu smashed home the equalizer in the 96th minute to give Bibiani Gold Stars a deserved point.

In Sogakope – two goals were produced as WAFA shared the spoils with Bechem United in a 1-1 draw. Foster Appiah gave the Hunters a deserved lead in the 18th minute but Bechem United failed to protect the lead as Michael Zuo brought WAFA level seven minutes later.

Dreams FC picked a vital away point away from home as they battled to a goalless draw against two-time Champions Aduana FC at the Agyemang Badu Park at Dormaa.

In Obuasi – Yaw Annor scored twice but that wasn’t enough as Accra Lions FC twice came from behind to hold AshantiGold SC to a 2-2 draw at the Len Clay Stadium. Yaw Annor opened the scoring in the 23rd minute - his 17th goal of the campaign to put AshantiGold ahead.

He received a sublime pass from Stephen Owusu Banahene in the middle before lifting over Lions goalkeeper Frederick Asare for the opener. Substitute Eric Okyere pulled parity for Accra Lions in the 64th minute as he dribbled past Kwadwo Amoako before slotting home.

Yaw Annor again netted for the Miners to register his 2nd of the day and 18th of the season as AshantiGold restored their advantage one minute from full-time.

But that didn’t deter Lions from pushing as they scored through Shawkan Mohammed at the death to settle the scores.

Real Tamale United failed to make use of playing at their favorite Aliu Mahama stadium as they drew goalless with Techiman Eleven Wonders on Sunday.

Elmina Sharks suffered yet another defeat – this time at the Golden City Park at Berekum as Chelsea scored in each half to pick all the spoils. The Blues shot into the lead through Emmanuel Sarpong in the 12th minute before Henry Ansu added the second goal inside 31 minutes. Back from recess, Collins Ameyaw smashed home from close range to make it 3-0 for the former League Champions.