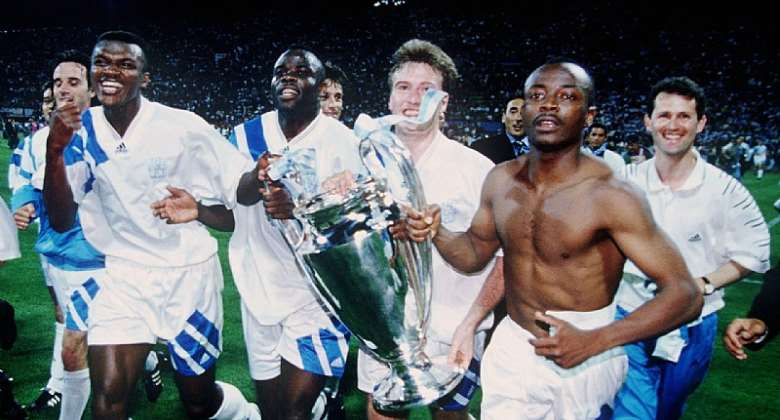 Liverpool will face Real Madrid in the Champions League final on Saturday in a repeat of the clash from 2018 which saw the Spanish giants triumph.

Egypt captain Mohamed Salah has said the Reds are out for revenge after Real confirmed their place in Paris.

Salah suffered a shoulder injury which forced him off before half-time during that meeting four years ago in Kyiv. Senegal forward Sadio Mane equalised for Liverpool after they went 1-0 down, but Real eventually won 3-1.

As Mane and Salah - along with Cameroon defender Joel Matip and Guinea midfielder Naby Keita - look to seal Liverpool's seventh European crown, BBC Sport Africa looks back on six of the continent's best Champions League final moments since the competition was rebranded in 1992.

African football became inextricably linked with the Champions League in its debut season, with Nigeria striker Daniel Amokachi netting the first ever goal in the group stage as he struck the winner for Club Bruges against CSKA Moscow in the 17th minute.

Another West African would then play a pivotal role in the final.

Ghana star Abedi Pele had notched two goals for Marseille in the group stage, and set up the winning goal against AC Milan in Munich's Olympiastadion.

His in-swinging corner from the right flank two minutes before half-time was headed home by Basil Boli to sink the Italian giants.

That went some way to making up for Marseille's defeat on penalties by Red Star Belgrade in the European Cup final the year before, and Pele not only ended 1993 with his winner's medal but also his third straight African Player of the Year Award.

Seventeen years have passed since the greatest comeback in Champions League final history.

Jerzy Dudek saved two penalties in the shoot-out to complete a memorable night and spark wild celebrations in Istanbul, with left-back Djimi Traore also becoming the first Malian to win the trophy.

"It was an explosion and we ran everywhere on the field," the 42-year-old told BBC Sport Africa.

"When I look back on that experience, it was one of the best moments in my life. I think it was destiny. No player from Mali had won the Champions League and to be the first one, I was very, very proud.

"I know in the country everyone was watching me play and supporting me. To give them that joy for that journey, it was fantastic."

Cameroon striker Samuel Eto'o was involved in the two pivotal moments as Barcelona beat Arsenal 2-1 to end their 14-year wait for the trophy.

First, he was fouled outside the area by Gunners goalkeeper Jens Lehmann in the 18th minute, as the German became the first man to ever be sent off in the final.

Trailing to Sol Campbell's first-half header, Eto'o scored the equalising goal in the 76th minute - being played in by Henrik Larsson and squeezing the ball between replacement keeper Manuel Almunia and his near post from a tight angle.

Four minutes later, the turnaround was complete when Juliano Belletti fired in to give the Spanish giants their second European title.

Eto'o's performance saw him named man of the match - not bad given that team-mate Ronaldinho was the reigning World Footballer of the Year.

The Indomitable Lion would go on to score for Barca in their 2-0 final win over Manchester United in 2009, and was also on the pitch as Inter Milan won the title a year later against Bayern Munich.

Didier Drogba was always the man for the big occasion at Chelsea, netting nine goals in 10 finals during his trophy-laden spell at Stamford Bridge.

However, the Champions League looked to be the one honour that would elude the west Londoners - especially when the Ivory Coast striker was sent off in extra-time against Manchester United in the 2008 final in Moscow, a match the Blues lost 6-5 on spot-kicks.

Facing Bayern Munich in the German club's own stadium and trailing 1-0 after Thomas Muller's 83rd-minute opener, the Ivorian equalised with a bullet header from Juan Mata's corner with just two minutes remaining.

The 34-year-old did give away a penalty in extra-time - which Chelsea goalkeeper Petr Cech saved - but he rolled in the winning spot-kick in the shoot-out to give Chelsea the biggest prize in European club football in what was the final appearance of his first spell with the Blues.

Mohamed Salah (right) scored from the spot as Liverpool won in 2019, a year after losing the final to Real Madrid

There was a real African flavour to Liverpool's sixth Champions League victory, as Cameroon's Joel Matip, Senegal's Sadio Mane and Egypt's Mohamed Salah all started against Spurs and went on to have vital roles in Madrid.

Mane was the first to make an impact, with his attempted cross hitting the outstretched arm of Moussa Sissoko after just 24 seconds, with Salah calmly slotting home the resulting penalty.

Stunned by the early goal, Spurs spurned chances to equalise in a lacklustre encounter before Matip diverted the ball into the path of substitute Divock Origi, who ensured the win in the dying seconds.

Matip, Mane and Salah have another chance to add to their winner's medals collection when Liverpool face Real Madrid on Saturday - with Guinea midfielder Naby Keita also expected to be in the Reds squad for the Paris final.

The match would be settled 1-0 in the west Londoners' favour, and Edouard Mendy wrote his name into the competition's history books.

The Senegal goalkeeper, who only joined the Blues the previous September, notched his ninth clean sheet to match the record held by Santiago Canizares (with Valencia in 2000-01) and Keylor Navas (Real Madrid in 2015-16).

Mendy's tally was also the most ever by a man playing their maiden Champions League campaign and those performances helped see him named Best Fifa men's keeper for 2021.

He may not have been given much to do by City during the final in Porto but, given the Senegalese spent time unemployed in 2015, it capped a remarkable personal turnaround.