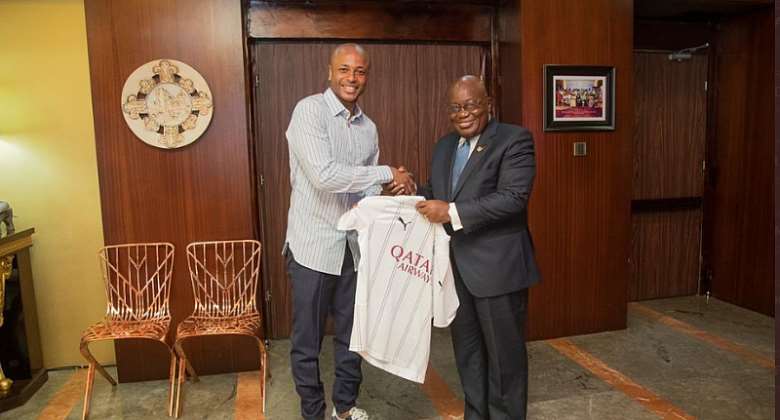 Ghana captain, Andre Ayew has paid a courtesy to the President of the country, H.E Nana Addo Dankwa Akufo-Addo on Friday.

The Al Sadd forward presented a customized jersey to Akufo Addo upon his visit to the Jubilee House.

Andre has been in Ghana for the past week and has been training personally ahead of the 2023 Africa Cup of Nations [AFCON] qualifiers against Madagascar and the Central African Republic [CAR].

In a tweet, Andre shared, “Thank you his Excellency, Mr. President.” Ayew posted with a picture with the Ghana first gentleman.

Andre Ayew, 32, is one of the 33 players invited by Ghana head coach Otto Addo for the first phase of the qualifiers for the 2023 TotalEnergies Africa Cup of Nations (AFCON) tournament.

He is expected to feature in both games against Madagascar and the Central Africa Republic.

Andre won his first league title in his career and his second trophy with Al Sadd after winning the Emir Cup in his debut season with Al Sadd in Qatar.

He joined the Qatari giants in July 2021 as a free agent and put pen to paper on a two-year contract.