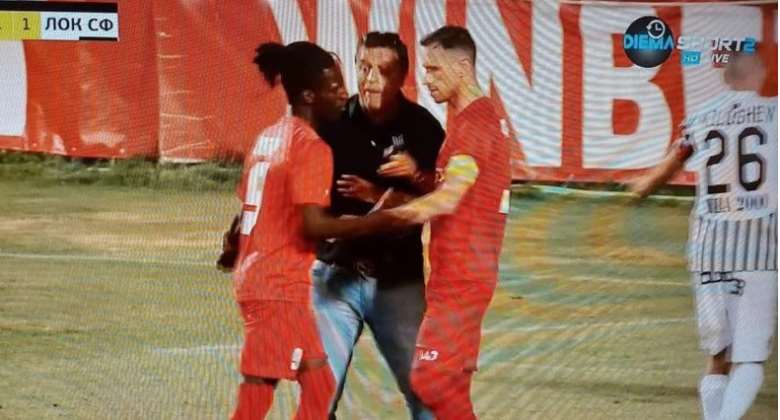 A Bulgarian club has suffered relegation after a player failed to convert a late spot-kick.

A relegation playoff game between Tsarsko Selo and Lokomotiv Sofia got very tense as both clubs battled for three points.

Lokomotiv Sofia took a first-half lead through Frane Cirjak, but the home side restored parity in the 73rd minute when Andrey Yordanov scored from a brilliant finish.

The game looked destined to end in a draw until Tsarsko Selo were awarded a 96th-minute penalty and an opportunity to save their topflight status.

Yusupha Yaffa, who is a regular spot-kick taker picked the ball to take the penalty but the club’s owner, Stoyne Manolov, quickly moved on to the pitch to take the ball from him.

In a video that has gone viral on social media, the club’s owner is seen having a heated exchange with Yaffa and pushing him off the pitch.

The pair continued their disagreement until the match official intervened to ensure Manolov was walked off the pitch.

Manolov then insisted that the club’s regular penalty taker, Martin Kavdanski, took the kick and was granted his wish.

Unfortunately, though, Kavdanski couldn’t convert from 12 yards as his weak effort was saved, condemning Tsarsko Selo to relegation.