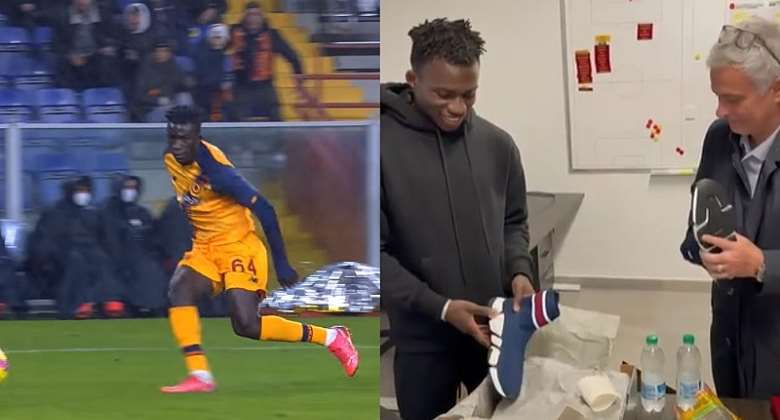 AS Roma manager, Jose Mourinho has revealed the reason behind his decision to buy Ghanaian youngster, Felix Afena-Gyan a pair of Balenciaga sneakers.

After making his debut against Cagliari in November last year, the 19-yea-old hogged the headlines with his brace against Genoa.

Mourinho honored his promise by getting him the pair of sneakers but revealed that the actions of his teammates propelled him to get Afena-Gyan the shoes.

The Portuguese gaffer disclosed that Afena-Gyan was constantly mocked by his teammates for coming around with fake trainers all the time.

The former Chelsea boss added that forced him to strike deal with the youngster by promising to get him his adored sneakers if he scores in the Serie A.

"He was there, he didn't have a contract and he was coming all the time with fake trainers and all the guys there were having fun with him," Mourinho told BT Sports.

"The moment he came here and the moment he scored a winning goal, I had to say: Felix, it's time for the guys to stop bullying you, so let's buy a proper pair of shoes," he added.

"Now he signs a contract, he goes to Ghana national team and he has fun with the other guys because the other guys are not going to the World Cup, but he is. So at this moment, things are changing."

Afena-Gyan and his teammates are currently in Tirana, Albania ahead of the final of the Europa Conference League against Feyenoord.