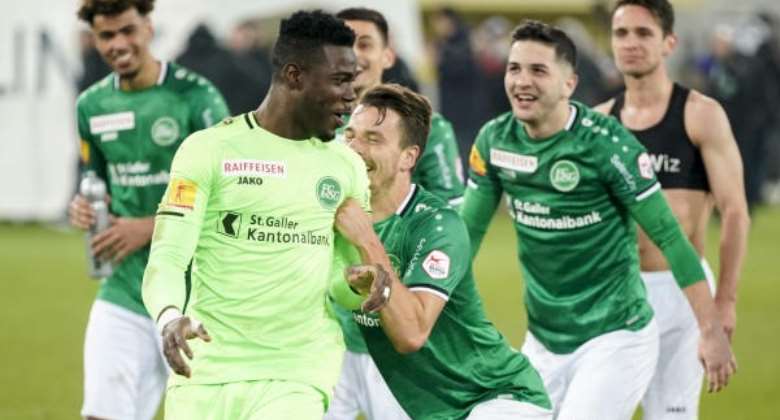 Black Stars goalkeeper, Lawrence Ati-Zigi displayed outstanding form in post while in action for his FC St. Gallen outfit in the Swiss Super Lig on Sunday.

Following his outstanding displays that helped his club to record a big win while keeping a clean sheet, the goalkeeper has finished the weekend as the highest-rated Ghanaian player abroad.

Having followed the action of Ghanaian players from Friday, May 20, to Sunday, May 22, 2022, Modernghana Sports partner SofaScore has put together another list of the top 10 players that performed well.

In the top half of the list, Emmanuel Boateng, Lawrence Agyekum, Malik Abubakari, and Alfred Duncan join goalkeeper Lawrence Ati-Zigi for the top five.

With his starring role for Crystal Palace in the historic win against Manchester United over the weekend, versatile Jeffrey Schlupp is included in the list.

As reported by Modernghana Sports in the past weeks, a number of players making it into the weekly list put together by SofaScore are set to be included in the Ghana squad for the first phase of the qualifiers for the 2023 TotalEnergies Africa Cup of Nations (AFCON) tournament.

In early June, the Black Stars will take on Madagascar and the Central African Republic in Cape Coast and Luanda respectively.

Coach Otto Addo is likely to come up with his squad list for the two matches by the close of this week.