DOL: Kotoku Royals wins protest against Heart of Lions to move to top of Zone Three 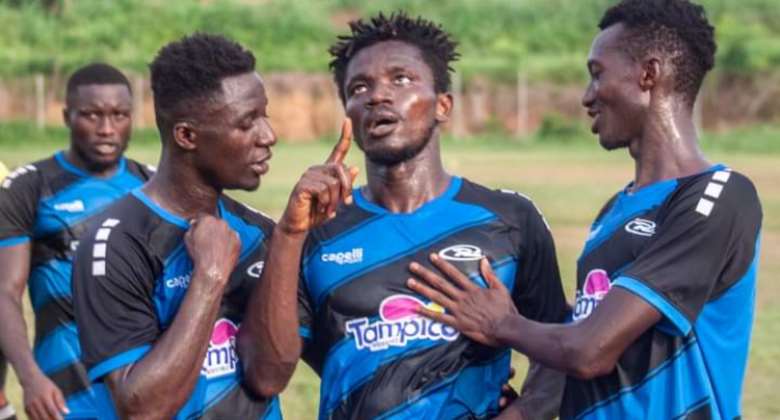 Kotoku Royals have moved to the top of Zone Three in the Division One League after being declared winners of a protest against Heart of Lions.

Heart of Lions according to the ruling of the Disciplinary Committee suffered points deduction after fielding an unqualified player against Kotoku Royals in a Division One League fixture in March.

Abdul Mohammed Musah was unqualified to play for Heart of Lions against the Oda-based side during a second-tier match on March 20.

Kotoku Royals FC have benefitted after filing a protest as they keep their hopes of playing in the Premier League alive.

Kotoku Royals now sit top of Zone Three with 56 points with chasing sides Tema Youth and Liberty Professionals pegged at 55 points each with four games to end the season.

"That the protest filed by Kotoku Royals FC shall succeed. That having been found to have forfeited the match, Heart of Lions FC shall be considered as having lost the match by Articles 33(2) and 34(12), and accordingly, three points and three (3) goals are hereby awarded in favour of Kotoku Royals FC, part of the ruling read.

"That in addition, being the defaulting club, Heart of Lions FC shall lose three (3) points from the club’s accumulated points from their previous matches under Article 33(5)(a) of the Division One League Regulations.

"That in addition, being the defaulting club, Heart of Lions FC is hereby fined Two Thousand and Five Hundred Ghana Cedis (GH¢2,500.00) payable to the GFA, 50% of which shall be paid to Kotoku Royals FC under Article 33(5)(b) of the Division One League Regulations.

"That the fines mentioned above, shall be paid to the GFA within fourteen (14) days upon receipt of this Ruling, failing which Heart of Lions FC shall forfeit their subsequent matches after the said deadline.

"That should any party be dissatisfied with or aggrieved by this Decision, the party has within one (1) day of being notified of this Ruling to appeal to the Appeals Committee of the Ghana Football Association."

In their defence, Heart of Lions FC admitted that the player was suspended for the said match and the Club was duly noted that he was unavailable for the match.

According to the respondent, unintentionally without malice, the player’s name was inadvertently selected the player’s name in the team sheet and could not correct it due to internet challenges before the match kickoff.

Heart of Lions FC stated that attempts to effect changes to the team sheet before kickoff also proved futile and thus pleaded for leniency.

By the club’s admission, Hearts of Lions FC admitted to have named the said player who was unqualified to play in the match in the squad list unintentionally.