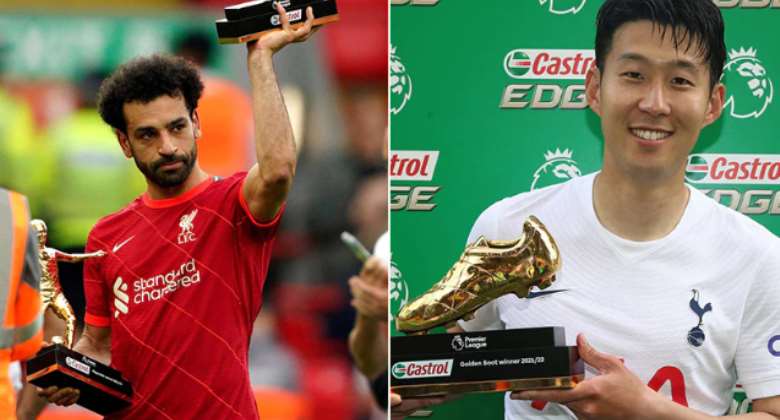 Egyptian Salah began the final day one goal clear of the South Korean at the top of the scoring charts.

Son scored twice in Tottenham's 5-0 win at Norwich but Salah struck late on as the Reds beat Wolves 3-1.

In the latter case, Salah was involved in a three-way tie at the top of the scoring charts alongside his Liverpool team-mate Sadio Mane and then-Arsenal forward Pierre-Emerick Aubameyang.

Salah's total of 23 goals this season includes one hat-trick, which he scored in a 5-0 win at Manchester United on 24 October.

Twenty of his strikes had come by 12 March but his scoring form tailed off after that, with two in a 4-0 win at home to Manchester United on 19 April and one more against Wolves.

In contrast to Salah's finish to the season, Son struck nine times in his last 10 games, including six in his final five, to shoot up the scoring charts.

He managed one hat-trick this season, in a 4-0 win at Aston Villa in April.

Manchester City goalkeeper Ederson and Liverpool number one Alisson share the Golden Glove award after finishing the season on 20 clean sheets each.

Ederson has missed just one game for the Premier League champions this term - a 2-0 win over Burnley in October - while Alisson was only absent for the Reds' 5-0 win at Watford in October and the 2-2 draw at Stamford Bridge in January.

The duo finish ahead of Tottenham goalkeeper Hugo Lloris, who ends the campaign on 17 clean sheets.

Ederson was the outright winner of the award in each of the past two campaigns, while Alisson won the award in 2018-19.

The Premier League's Playmaker of the Season award, which was introduced in 2017-18 for the player with the most assists, also goes to Salah.

The Egyptian ends the season on 13 assists, one better than his Liverpool colleague Trent Alexander-Arnold.

Salah has now reached double figures for goals and assists in four of his five league campaigns at Anfield. The only time he failed to do so was in 2020-21, when he only set up five league goals.