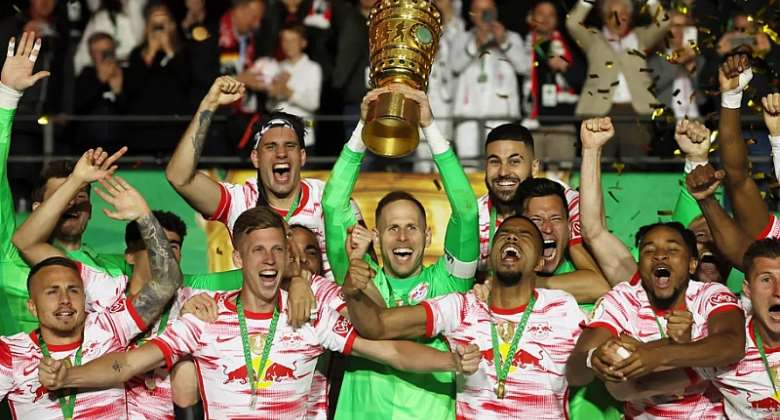 Leipzig's Hungarian goalkeeper Peter Gulacsi (C) and his teammates celebrate with the trophy after the German Cup final football match between SC Freiburg and RB Leipzig at the Olympic Stadium in Berlin on May 21, 2022. Image credit: Getty Images

Leipzig, who played over 60 minutes with 10 men, beat Freiburg 4-2 on penalties in the DBF Pokal final, with the two teams having been level at 1-1 after 120 minutes at the Olympiastadion in Berlin.

Maximilian Eggestein opened the scoring for Freiburg midway through the first half in controversial fashion, after the ball was directed into the German midfielder’s path by the hand of team-mate Roland Sallai.

In the second half Freiburg’s Lucas Holer was cynically brought down by Marcel Halstenberg, who received a straight red card, yet Leipzig still managed to find a way back in the game after talisman Christopher Nkunku claimed his 35th goal of the season to level proceedings.

Freiburg hit the woodwork three times in extra time, while Leipzig had a massive shout for a penalty waved away by the referee moments before the final whistle after Dani Olmo was brought down by Nicolas Hofler in the box.

Leipzig subsequently won 4-2 on penalties and claimed the first trophy in their 13-year history after Christian Gunter and Ermedin Demirovic missed their respective spot kicks for Freiburg.