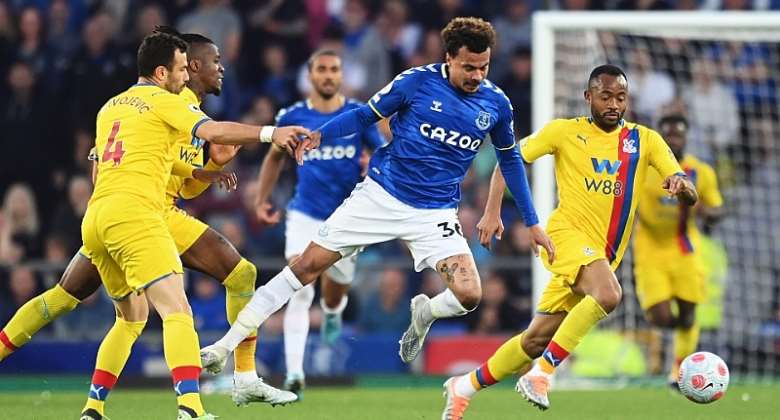 Everton staged a dramatic fightback from two goals down to preserve their Premier League status with a 3-2 win against Crystal Palace, while Burnley climbed out of the relegation zone after a 1-1 draw at Aston Villa on Thursday.

Frank Lampard's side recovered from conceding twice in the first half as Michael Keane and Richarlison netted after the break before Dominic Calvert-Lewin's late winner sparked wild celebrations at Goodison Park.

After a nerve-jangling battle to avoid playing outside the top-flight for the first time since 1954, Everton can finally relax with one game to play.

Their thrilling comeback was a microcosm of Lampard's reign since he took over in January, with Everton staring disaster in the face before pulling back from the brink.

"It is the character of this club, the fans and the players that dragged us through," Lampard said.

"The players to a man were incredible. The fans lifted them and we created a special night in Everton's history.

"The spirit of the club was immense. I'm overwhelmed."

Burnley, who host Newcastle in Sunday's final round of fixtures, climbed above Leeds on goal difference thanks to their point at Villa.

They will be safe if they match Leeds' result at Brentford on the last day.

Whatever happens at the weekend is unlikely to surpass the emotion at Goodison, where fans wept tears of joy during a frenzied post-match pitch invasion.

Palace had silenced the boisterous crowd with their 21st minute opener.

Vitalii Mykolenko allowed Jean-Philippe Mateta to get in front of him and the Palace forward headed in Eberechi Eze's free-kick.

Several bottles were thrown towards Mateta and the atmosphere turned even more toxic in the 36th minute when Jordan Ayew poked home after Abdoulaye Doucoure failed to clear.

But Lampard had labelled the game "all or nothing" and Michael Keane gave Everton a vital 54th minute lifeline, the defender applying the finishing touch from Mason Holgate's header.

Revitalised, Everton laid seige to the Palace goal and Richarlison hooked the equaliser past Jack Butland in the 75th minute.

With Goodison at fever pitch, Dominic Calvert-Lewin completed the comeback in the 85th minute with a clinical header that sparked a jubilant pitch invasion.

At Villa Park, Burnley's Maxwel Cornet won a penalty on the stroke of halftime when he was bundled over by Emiliano Buendia.

Ashley Barnes sent Emiliano Martinez the wrong way with a cool strike for his first goal since February 2021.

In the 48th minute, Buendia volleyed Villa's equaliser, with Burnley protesting that a foul throw should have been given in the build-up.

Burnley finished with 10 men after Matt Lowton was sent off for a high tackle on Calum Chambers in stoppage-time.

"Terrific point for us. We're at home on the last day and it's in our hands," Burnley interim boss Mike Jackson said.

Chelsea effectively guaranteed a third place finish with a 1-1 draw against Leicester at Stamford Bridge.

Given their vastly superior goal difference advantage over fourth placed Tottenham, who sit three points behind them, the FA Cup runners-up will not be caught.

James Maddison gave Leicester a sixth minute lead from the edge of the area before Marcos Alonso volleyed home in the 35th minute.

Thursday's drama was only an appetiser for what will be a thrilling final day of the season.

Manchester City will be crowned champions for a fourth time in five seasons if they beat Villa at the Etihad Stadium.

But second placed Liverpool, one point behind Pep Guardiola's team, would steal the title if City drop points and they defeat Wolves at Anfield.

In the battle to qualify for next season's Champions League, Tottenham need to a win at Norwich to be certain of pipping Arsenal, who host Everton and are two points behind their north London rivals.