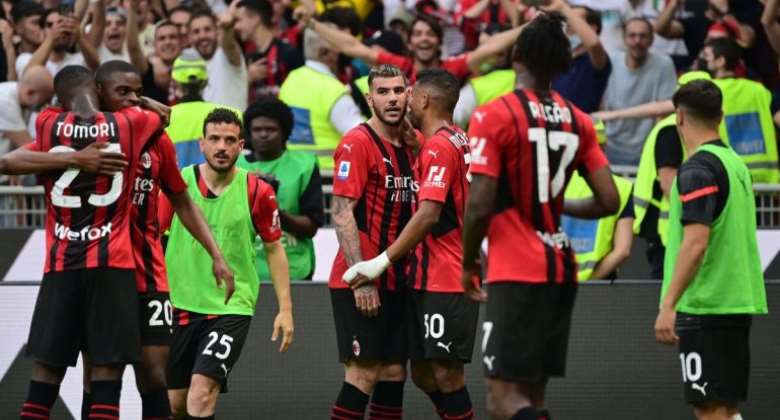 A Rafael Leao strike and an incredible solo effort from Theo Hernandez earned AC Milan a 2-0 win over Atalanta at a raucous San Siro on Sunday, putting the Rossoneri on the brink of claiming their first Serie A title in 11 years.

Stefano Pioli’s side will be crowned champions by avoiding defeat at Sassuolo on the final day of the season.

A nervy first half was short on big chances, but Atalanta striker Luis Muriel came closest when he unleashed a fierce shot from outside the box on the half-hour mark, which Mike Maignan had to spring to his left to beat away.

Milan dominated possession without managing to truly test Juan Musso in the visiting goal, while Olivier Giroud’s penalty claims just before the break only earned him a booking after he was held back by Berat Djimsiti while chasing a long ball.

Stefano Pioli eventually turned to his bench for inspiration, bringing on Ante Rebic and Junior Messias, and within two minutes of the latter coming on he had provided an assist for Leao, who chased the Brazilian’s pass and fired home a low shot on the 56th minute.

Atalanta replacement Duvan Zapata also made a difference but couldn’t make his chances count, lashing over a shot and heading wide from a free header, and the Colombian was made to pay for his wastefulness by Hernandez.

The French full-back took off on a mazy run deep inside his own half, dribbling all the way into the Atalanta box and finding the bottom corner to send the Rossoneri supporters into a state of delirium they haven’t known in over a decade.

Latest Photo Reports
Catch up with all the political quotes from our politicians.
Advertise here
More from Football News
ModernGhana Links
Match Fixing: I will rather fixed goals for Mbella over Yaw Annor - Gold Stars coach Michael Osei
Egypt appoint Mark Clattenburg to oversee refereeing in country
My wife has thrown me out of the house - Legon Cities striker Hans Kwofie demands for unpaid wages
TOP STORIES