2021/22 PL: Pep Guardiola, Jurgen Kloppa and two three others shortlisted for Manager of the Season award 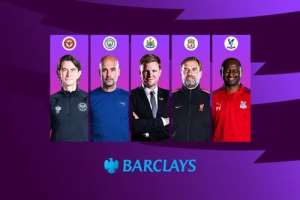 Five men have been nominated for the 2021/22 Barclays Manager of the Season award.

The fans have until 18:00 BST on Monday 16 May to choose their favourite by voting below.

The votes from the public will be combined with those of a panel of football experts to decide the winner.

P36 W12 D7 L17​ GF44 GA52 GD-8
The Dane has enjoyed an incredible debut Premier League season, leading his promoted Brentford team to 13th place as well as gaining plaudits for his team’s brilliant style of play which has helped them to beat Chelsea, West Ham United and Arsenal. ​

P36 W28 D5 L3​ GF94 GA22 GD+72
The Spaniard is aiming to win the award for a fourth time in five seasons as he looks to mastermind back-to-back titles for Manchester City. With two matches left his team have surpassed their points total from last season and are only four points away from being confirmed as champions.

P25 W11 D5 L9​ GF28 GA37 GD-9
Newcastle United are set to become the first club in Premier League history to stay up after winning none of their first 14 matches. Howe’s team had only five points when he took over in November but he has since led them up to 14th with 43 points, including a nine-match unbeaten run.

P36 W26 D8 L2​ GF89 GA24 GD+65
Klopp has Liverpool challenging for only their second Premier League title, sitting three points behind Man City having scored 89 goals and conceded only 24. His team have lost fewer matches than anyone else.

P35 W10 D14 L11​ GF46 GA42 GD+4
In his first season as a Premier League manager Vieira has Crystal Palace pushing for a top-half finish. He has excited fans at Selhurst Park with a new philosophy which is all the more impressive given the number of summer signings he has had to help settle in.

Terrorism: Be quick to report any suspicious persons or pack...
2 minutes ago