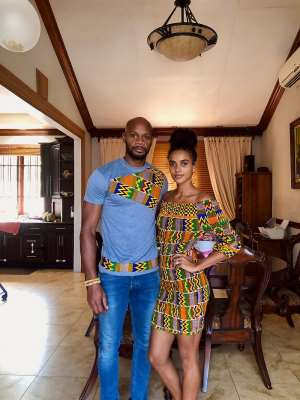 Top Jamaican athlete, Asafa Powell, and his family will visit the motherland, Ghana in December.

This was disclosed by the President of the Ghana Olympic Committee, Mr. Ben Nunoo Mensah who happens to be an uncle of Mrs. Alyshia Powell, wife of the man who has broken the ten-second barrier more times than anyone else—97 times.

Asafa Powell is a Jamaican sprinter who specializes in 100 metres. He set the 100 metres world record twice, between June 2005 and May 2008 with times of 9.77 and 9.74 seconds. Powell has consistently broken the 10-second barrier in competition, with his personal best of 9.72 s ranking fourth on the all-time list of men's 100-metre athletes. As of 1 September 2016.

While in Ghana, he will hold a series of programs with young sportsmen and women and visit popular tourist sites and educational institutions.

He will also meet top sports personalities as well as high rankings government officials and find possible avenues of creating fruitful relationships between Ghana and Jamaica in the area of sports and related businesses.

Mr. Ben Nunoo Mensah said Ghana and Jamaica have many things in common and Alyshia Miller Powell, a supermodel will also be the guest of some women's groups like the Women's Commission of the GOC, WOSPAG, and WISA.

Powell competed in the 100 m at 2004, 2008, and 2012 Olympics, finishing fifth in 2004 and 2008 and eighth after injuring his groin during the race in 2012. At the 2007 Osaka World Championships, he won a bronze and a silver medal in the 100 m and 4 x 100 m relay respectively, and he was successful at the Commonwealth Games, winning two golds and one silver medal. At the 2009 World Championships, he won the 100 m bronze and relay gold. Powell has won five times at the IAAF World Athletics Final and was the former 100 m world record holder in the event.

Going to the IMF with Ken Ofori-Atta as the lead will yield ...
12 minutes ago