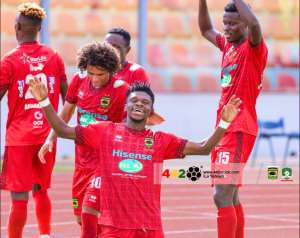 In the matchday 28 games, the Porcupine Warriors hosted the two times Ghana Premier League at the Baba Yara Stadium on Sunday afternoon.

However, the Reds were held to a 1-1 draw by the Dormaa-based club.

Etouga Mbella gave the home side the lead but the Cameroonian import later missed two penalties with Bright Adjei grabbing the equalizer for Aduana Stars in the dying embers of the game to hand his side a deserving draw at away.

Speaking at his post-match press conference, coach Narteh said, "We were just not lucky. Not all, I didn't want to change him cos he's been playing and scoring our penalties. This isn't the first he is missing a penalty. I think he did that when we went to Elmina Sharks, I spoke with him, he got his confidence back and was scoring but is unfortunate he missed this time."

"He scored a good goal. We could have gone up by three goals but we couldn't. Is the game over and we can't do anything about the scoreline, we only have to encourage the young man to get his confidence back so that in subsequent games he can give us what he's been given to us?"

Asante Kotoko despite the draw sit top of the league log with 56 points.

Kotoko will be hosted by AshantiGold SC in the matchday 29 games at the Obuasi Len Clay Stadium.

Franklin Cudjoe back calls for probe into Covid-19 expenditu...
55 minutes ago