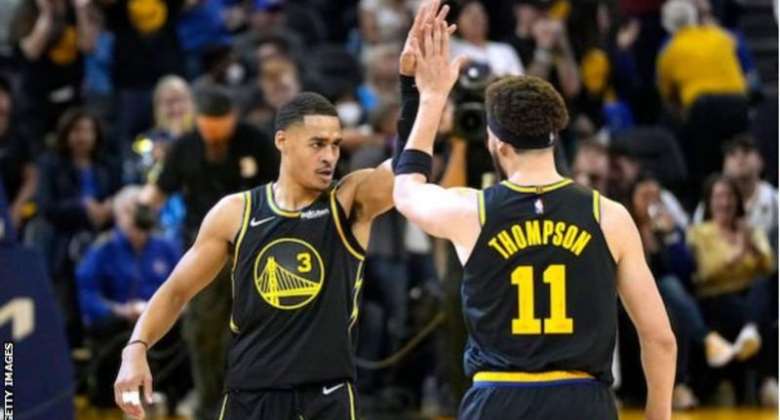 In the Eastern Conference playoffs, the Milwaukee Bucks edged out the Boston Celtics 103-101.

Giannis Antetokounmpo scored 42 points as the Bucks moved 2-1 ahead.

The Celtics had mounted a late comeback in Saturday's game three, bouncing back from 13 points adrift to take a one-point lead with one minute and 49 seconds remaining courtesy of Jaylen Brown's pair of free throws.

But Antetokounmpo and Jrue Holiday put the Bucks back ahead, a lead they didn't again relinquish despite late attempts from the Celtics with Al Horford landing what would have been a game-tying basket milliseconds after the buzzer had sounded.

In San Francisco, Curry made a team-high 30 points, while Thompson added 21 and Poole 27 off the bench in the Warriors win.

Curry's total was the fourth time in these playoffs that he had made 30 and moved him past Paul Pierce and Kevin McHale into 21st place on the NBA's all-time postseason scoring list.

The Grizzlies' Ja Morant led the game with 34 points but had to miss the final six minutes after appearing to clash knees with Poole.

Grizzlies' coach Taylor Jenkins later said Poole had "grabbed his knee and yanked it", with Morant later tweeting - and deleting - that Poole had "broke the code".

Poole denied he had intentionally hurt his opponent.

"I hit the ball and I was going for the ball. Obviously, you don't want to see anybody get hurt. I'm not even that type of player. I respect everybody," he said.

"Hopefully he gets better, and we can see him out there next game. I don't even play like that for real. That's not my type [of] game."