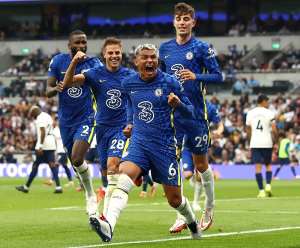 SuperSport viewers on DStv and GOtv can look forward to Round 35 action from the Premier League, with matches scheduled to run from Saturday 30 April to Monday 2 May 2022.

The pick of Premier League matches for this round sees West Ham United welcome Arsenal to the London Stadium on the evening of Sunday 1 May, as the Hammers look to put a dent in the Gunners’ hopes of finishing in the top four.

One of the driving forces behind West Ham’s fine season has been midfielder Declan Rice, with manager David Moyes emphasising that the England international is not for sale once the season wraps up.

“But the best thing to say is that 'no we've not' [had contact over Rice], and let me tell you, he's not for sale. So, that may shut down any questions about Declan, but we do expect questions on him because he's doing so well,” said Moyes. "Is he irreplaceable? Well, I had to sell Wayne Rooney early when I was at Everton. I thought Wayne was irreplaceable but what happens in football is you move on. That is what happens in football.”

The round opens with a potential thriller between Newcastle United and Liverpool at St. James Park early on Saturday afternoon, while the Reds’ title rivals Manchester City will have to wait until the late kick-off for their clash at Elland Road against Leeds United.

Sunday, aside from the West Ham v Arsenal derby, will also feature Everton hosting Chelsea at Goodison Park. The Toffees manager Frank Lampard will come up against his former team and be desperate for points to keep the Merseyside club away from relegation.

“Everton has a huge history and fan base. At the moment we are working to get through this moment. Myself and the players are giving everything. The fans can know if we keep doing that, we will be okay,” said Lampard.

The round wraps up on the evening of Monday 2 May with Manchester United hosting Brentford at Old Trafford. The Bees will hope rejuvenated midfielder Christian Eriksen continues his wonderful form since returning to top-flight football.

“I never knew how quick it would be to get to this level, but it’s impressive and we’re just pleased and so proud,” said Brentford boss Thomas Frank of his fellow Dane. “You can always give it to Christian and he will find a solution.”