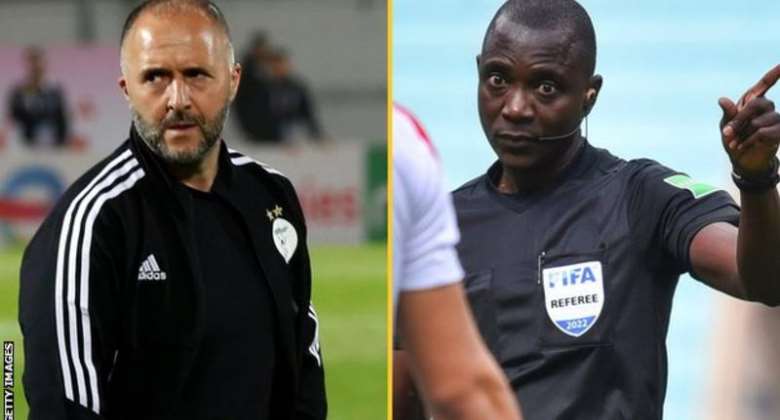 The Gambia Football Federation (GFF) has requested that disciplinary proceedings be opened against Algeria coach Djamel Belmadi following derogatory remarks he made about referee Bakary Gassama.

Belmadi appeared to encourage verbal and physical attacks on the Gambian official in a video posted by Algeria's football federation (FAF), saying: "I'm not saying that you have to kill him".

Gassama has received criticism in Algeria for his decisions during their 2-1 defeat by Cameroon in a 2022 World Cup qualifying tie on 29 March, a result which saw the North Africans miss out on a place at the tournament in Qatar.

The GFF said it has been following with "grave concern" the verbal attacks launched against Gassama.

A statement from the organization said it had made a formal complaint to FAF, and asked Fifa and the Confederation of African Football (Caf) to open investigations and disciplinary proceedings against Belmadi, 46.

"We've asked the Algerian federation to make a public statement condemning the actions of Mr. Belmadi and all the verbal attacks against Mr. Gassama by Algerians," the GFF statement said.

It added that FAF should "take all necessary precautions to restrain their officials and nationals from making any further negative remarks and threats against Mr. Gassama".

"Otherwise, their federation will be held responsible and complicit for any harm which may happen to him."

Gassama, 43, has officiated at the past two World Cups and refereed three matches at the Africa Cup of Nations earlier this year.

Last month, FAF lodged a request with the world governing body Fifa that the play-off match against Cameroon be replayed, citing "scandalous arbitration" which "distorted the result".

Algeria striker Islam Slimani had two goals ruled out, one for offside and one for handball - the latter after a video assistant referee review before Karl Toko Ekambi scored a 124th-minute winner for the Indomitable Lions in Blida.

"Never again will we allow a few people to conspire against our country," Belmadi said in a video posted on Sunday.

"I have to say, I didn't like at all to see the following day when this referee (Bakary Gassama) left from Algiers airport, to see him comfortably seated in the lounge suite with a coffee and a pastry. I didn't like that.

"I didn't like the fact that we would accept these kinds of things. He stole the hope of a whole nation, and we treat him like this.

"I'm not saying you have to kill him, I'm not saying things like that. But he's a bully, more than a bully. We can't ever accept that again."

Belmadi said that he told Gassama what he thought of him not only in the Algiers airport but also in Turkey when he ran into the Gambian again.

Speaking a few weeks ago, Gassama told a Gambian newspaper: "If they win you are the good referee, and if they lose they label you as the bad referee."