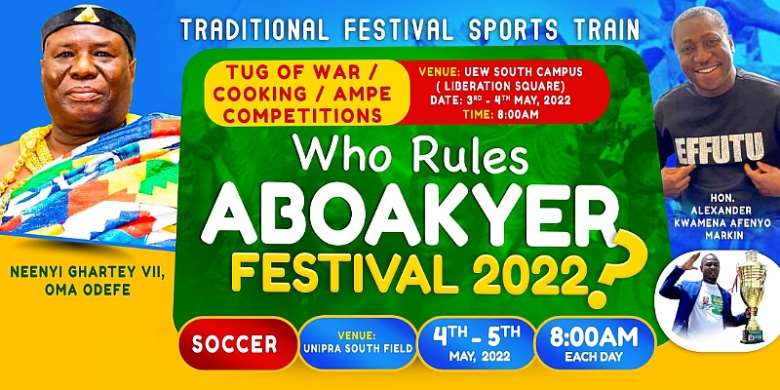 The chiefs and people of the Effutu Traditional Area in Winneba are getting set for the 2022 Aboakyer Festival Sports which takes place in the first week of May.

The four traditional sports disciplines festival will involve Ampe, Tug of war, and a cooking competition which would be held at the UEW South Campus (Liberation Square) from May 2nd to 4th, and football to be played at UNPRA South Field on 4th and 5th May.

The Festival is coming off under the distinguish and Royal patronage of Neenyi Ghartey VII, Paramount Chief of the Effutu Traditional Area who has endorsed the program and hoping to use it to rekindle the famous Aboakyer Festival which is climaxed by deer haunting and other entertainment events.

Hon. Alexander Markin, Member of Parliament for Winneba has also backed the program and stretched his maximum support to create fun, unity, peace, and love for the people.

According to Mr. Emmanuel Olla Williams, CEO of Dreamland Sports Plus, the organizers of the program, everything is on course and they are just waiting for the D-day to kick off and pull.

He said many community groups have registered and the youth of Winneba are so excited and anxious to see action.

Students of the University of Education at Winneba are also extremely happy and want to support as well as get involved in the games.

He appealed to corporate bodies to sponsor the sports festival which is going to be very attractive and exciting.

The President of WOSPAG, Mrs. Joyce Mahama said because the National Sports Authority and Ghana Olympic Committee want to promote Ampe to become a popular sport, she is fully backing the organizers and participants wishing them all the best of luck.

She appealed to the media to promote traditional sports to become very popular in Ghana.