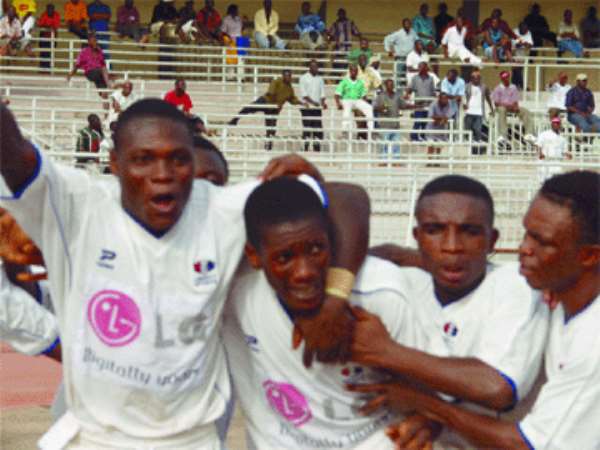 Accra, Oct 14, GNA - Liberty Professionals increased the tolling bells of relegation in the Accra Great Olympics camp when they thumped them 3-0 in the seventh week Premier league match at the Accra Sports Stadium on Thursday.
Olympics on a four match losing streak and lying at the bottom of the Group B table with only two points from a possible 21 came into the match with the determination to snap the trend of losses before the start of the second round.
But Liberty who were heavily criticized for their poor performance in their last home match against Hasaacas in their last home match of the first round had other ideas up their sleeves as they opened up from the start to redeem their battered reputation.
However, Liberty's first sniff at goal came as early as the seventh minute when David Boateng fired a loose ball miles off target. Not heeding to early warnings, Olympics were punished in the 10th minute when Kwame Obeng Darko scored the opener with a low drive that squeezed beneath onrushing Theodore Atsu in post for the "Wonder boys". Liberty did not let off their onslaught after the early lead and two minutes later they nearly doubled the score but for a lazy header from David Boateng that went wide off the mark.
Olympics gradually recovered and in the 22nd minute, David Kabu nearly brought them on level terms when his volley from the edge of the box went into the side netting.
Sensing danger, the Olympics's coach brought on Osei Bonsu for Seidu Numeh in the 26th minute and the substitutes inclusion almost yielded dividends when in the 32nd minute his shot rebounded off a defender of Liberty but surprisingly the referee whistled play on. Osei Bonsu's inclusion turned a disaster for Olympics when he was red carded for a savage tackle on David Boateng who did not recover for his place to be taken by Odartey Lamptey.
Olympics playing with a man down from the start of the second half were not able to match the rampaging attackers of Liberty who nearly had their third goal had Lamptey maintained his composure up front in the 47th minute.
Substitute Joseph Tagoe who had come on just before the end of the first half almost brought Olympics into the game in the 64th minute but his effort was well saved by Patrick Antwi in post for Liberty. Liberty then took over the show and Obeng Darko added to the woes of Olympics in the 68th minute when he side footed a pass from Lamptey into the net after the two had beaten the Olympics offside trap.
The day was not to be for Olympics when Tagoe who brought some life into the attack and midfield agonizingly watched his effort rebound off the woodwork with keeper Antwi not in sight.
Lamptey had two great chances to completely crush Olympics in the 79th and 81st minute but for some brave saves exhibited by Atsu. With five minutes remaining, Lamptey finally had his goal when he toyed with the Olympics defence before blasting the ball into the roof of the net to sink them beyond recovery.