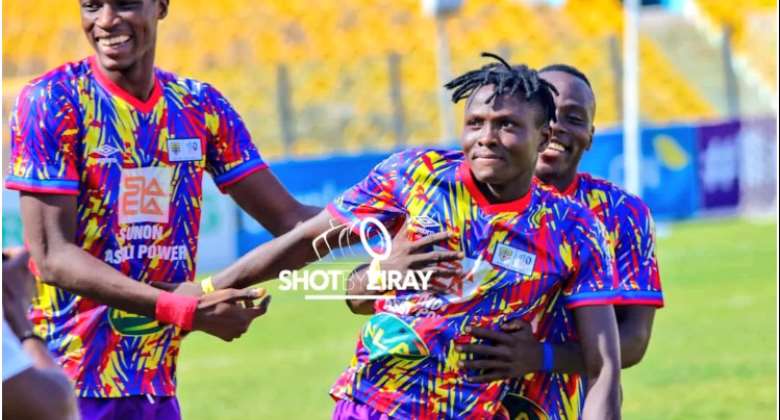 Real Tamale United scored in either half as they beat leaders Asante Kotoko 2-1 at the Aliu Mahama Stadium on Sunday. Ronald Frimpong gave RTU the lead after converting from the spot in the 26th minute.

The home side went into the game on the back of only one win from their last six League matches and needed to play above themselves to beat the League leaders. The Porcupine Warriors also came into the game with loads of confidence following their 1-0 win against rivals Hearts of Oak last weekend.

Victor Aidoo increased the advantage for Real Tamale United in the 85th minute as he headed home a throw-in from the right side to make it 2-0 to the Tamale lads.

Asante Kotoko goalkeeper Danlad Ibrahim misjudged his run as Aidoo soared high to head home the match-winner in the 85th minute before Frank Etrouga pulled one back for Asante Kotoko.

In Accra - Samuel Inkoom scored a world-class free-kick as Hearts of Oak threw away an early lead to draw 1-1 against Elmina Sharks at the Accra Sports Stadium.

The former Dnipro right back, who was making his third straight appearance for the Champions, curled in a sumptuous free-kick in the opening minute of the game to give Hearts a 1-0 lead.

The goal gave Hearts of Oak belief as they kept dictating the pace of the game. But it was the Sharks who showed desire and committed men forward for the equalizer as Michael Asamoah blasted home a very beautiful team to give them the equalizer in the 28th minute.

Legon Cities were a delight to watch in their near-perfect performance against Medeama SC at the El Wak stadium. After a barren first half, Abdul Rahman broke the deadlock in the 53rd minute before Hans Kwoffie grabbed a brace in the 63rd and 97th minutes respectively. The mauve and yellows reduced the deficit through a Vincent Atinga spot-kick in the 87th minute.

Eleven Wonders made headlines on Sunday after coming from two goals down to beat Bechem United 3-2 at the Ohene Ameyaw Park at Techiman. Augustine Okrah scored in the 31st minute –his 11th of the League campaign to give the Hunters a well-deserved lead.

Emmanuel Owusu made it 2-0 for Bechem United at the hour mark as they took a firm grip of the game. Eleven Wonders improved tremendously in the second half and their effort yielded results in the 79th minute when leading Laar Ibrahim converted from the spot to give them a glimmer of hope.

Moro Sumaila leveled matters for Wonders four minutes into stoppage before Ibrahim Laar got his second of the day three minutes later to wrap it all up at home.

At DUN’S Park – Bibiani Gold Stars recorded their sixth consecutive home win in the Premier League with a fine come from behind win against Accra Great Olympics. Prince Opoku Agyemang added to the tally 57 minutes after Yahaya Adraman had canceled Maxwell Abbey Quaye’s opener in the 22nd minute for the Dade Boys.

WAFA put in a strong performance to overcome Berekum Chelsea 3-2 at Sogakope. The win brings to an end a five-match winless run in the Ghana Premier League – as the win couldn’t take them out of the relegation zone.

Teenager Michael Zuo netted first for WAFA in less than one minute to hand them the lead before Sampson Agyapong converted from the spot to give them a 2-0 advantage. Berekum Chelsea responded in the 47th minute by scoring from the penalty spot through Henry Ainsu – but Ofori Agyemang got on the score sheet in the 51st minute to restore the two-goal lead for WAFA.

With 8 minutes left on the clock, Henry Ainsu again scored for the visitors but his goal wasn’t enough to rescue them as WAFA held on to win 3-2 at home.

Two-time Champions Aduana FC failed to pick all the spoils as they slipped to a goalless draw against AshantiGold SC at the Agyemang Badu Park.

Elsewhere at Ayinase – Umar Bashiru scored in the 8th minute to give Karela United a 1-0 win against Dreams FC.

In Kumasi, Frederick Asante won the day for Accra Lions as they beat King Faisal 1-0 at the Baba Yara stadium. The speedster headed in a cross from Fatawu Hamidu in the 15th minute to give the new boys a rare win on the road.