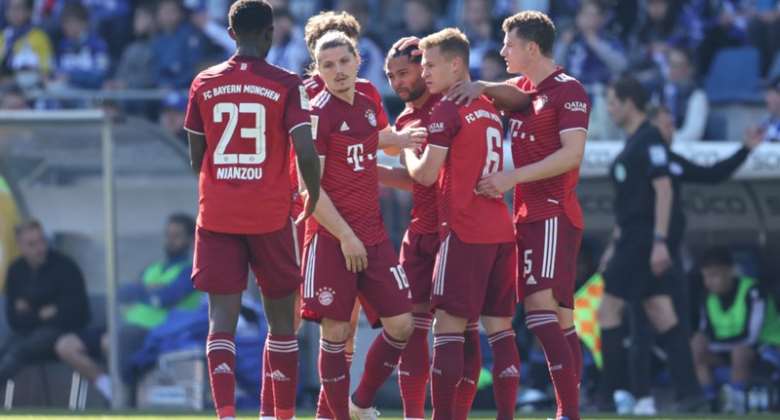 Bayern Munich can secure a 10th straight Bundesliga title next weekend after they bounced back from their Champions League exit with a 3-0 win at Arminia Bielefeld on Sunday.

"A bit of frustration was released after we were knocked out," Gnabry told DAZN.

Bayern returned to winning ways five days after conceding a last-gasp equaliser at home to Villarreal to crash out of the Champions League with a 2-1 aggregate defeat in the quarterfinals.

"I've had a hard time dealing with it," Bayern midfielder Joshua Kimmich, who was outstanding Sunday, said.

"It's still in the back of your mind."
There are four league games left but Bayern can secure the title by beating second-placed Borussia Dortmund in next Saturday's top-of-the-table clash in Munich.

"We definitely want to clinch it against Dortmund," Kimmich added.

Bayern were ahead after less than 10 minutes in Bielefeld when a Kimmich pass found its way to Robert Lewandowski, who got a touch before Laursen helped it over the line.

Bayern had a let-off when Japan midfielder Masaya Okugawa clipped the ball over Dayot Upamecano before firing past Manuel Neuer, but the goal was ruled offside.

Just before half-time, Bielefeld midfielder Fabian Kunze was stretchered off after being elbowed in the head by Bayern's Tanguy Nianzou, who was booked for the challenge.

It was Bielefeld's third worrying head injury in recent weeks.

In the seventh minute of first-half stoppage time, Bayern doubled their lead when Gnabry got on the end of another Kimmich pass to tap home.

Bielefeld kept searching for a goal to get back into the game after the break, but Bayern substitute Musiala secured the points with a late third.

Dominik Szoboszlai scored a late winner as RB Leipzig snatched a hard-fought 1-0 victory at Bayer Leverkusen, who they usurped in third place.

Leipzig are unbeaten in their last 14 games in all competitions and this was their eighth straight away win.

Eintracht Frankfurt crashed to a 2-0 defeat at Union Berlin three days after their stunning Europa League win at Barcelona.

Frankfurt won 3-2 at Camp Nou on Thursday to reach the Europa League's last four, but had no reply on Sunday as Union raced into a 2-0 lead after just 21 minutes in eastern Berlin.

"The lads tried everything, but we just weren't in a position to win here. It was a deserved defeat."

Japan midfielder Genki Haraguchi hit the post with a header, then Nigeria striker Taiwo Awoniyi brushed off his marker and swept the ball into the right corner.

After trapping the ball with a superb piece of skill, midfielder Grischa Proemel started a move he finished to score Union's second goal.

Bottom side Greuther Fuerth only have a mathematical chance of staying up after their goalless draw at Hoffenheim.

With four games left, Fuerth are 11 points from 16th and a relegation play-off at the end of the season.