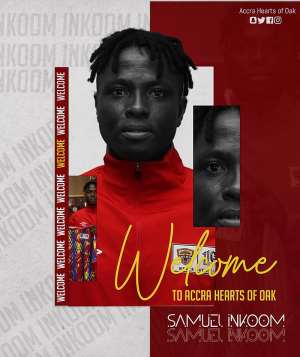 The official announcement from the club follows a report by Modernghana Sports that had indicated that the club had reached a deal to sign the former Ghana U-20 full-back.

“Welcome to the biggest club,” a club statement from Hearts of Oak said on Saturday morning.

Per the information gathered from sources, Samuel Inkoom has signed a year-long contract to play for Hearts of Oak.

Although he has travelled with the Phobians to Kumasi this weekend, he is unlikely to play in the Super Clash against Asante Kotoko on Sunday, April 10, 2022.

That encounter will be played at the Baba Yara Sports Stadium and is scheduled to kick off at 15:00GMT.

Going to the IMF with Ken Ofori-Atta leading will yield no r...
38 minutes ago