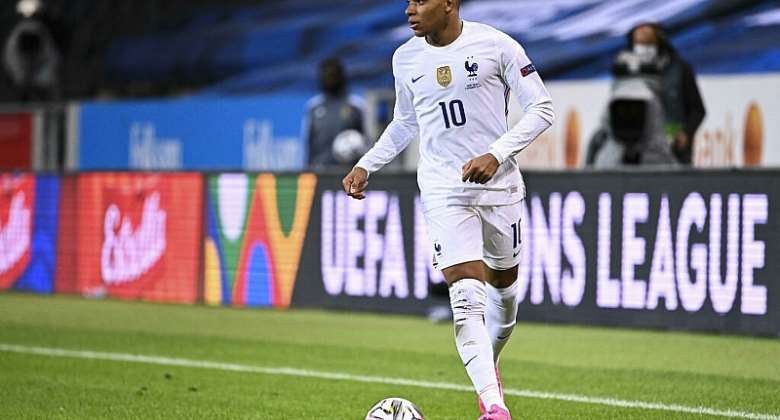 Kylian Mbappé struck twice as France crushed South Africa 5-0 on Tuesday night to register their second victory of the break for international matches.

Mbappé, who missed Friday night's 2-1 win over Cote d'Ivoire due to an an ear infection, struck the opener in the 23rd minute at the Stade Pierre Mauroy in Lille.

The Paris Saint-Germain striker curled his shot from the left hand side of the penalty area over the South Africa goalkeeper Ronwen Williams and into the net.

Ten minutes later Olivier Giroud doubled the advantage to notch up his 48th goal for France.

Mbappé struck the third in the 75th minute from the penalty spot after he was hauled down by Siyanda Xulu. It was the 23-year-old's 26th goal for his country in his 54th appearance.

Wissam Ben Yedder tapped home the fourth after Paul Pogba headed Mbappé's centre into his path and Mbappé set up Matteo Guendozi for his first international goal to round off the rout.

"I had a good time," Mbappé told French broadcaster TF1. "We played well and to get two victories over the past couple of days is good as well."

France coach Didier Deschamps added: "It was a good match. The players enjoyed themselves and entertained the fans. They're happy and so am I."

While France were strolling - their qualification for the 2022 World Cup in Qatar assured -  a host of European and African sides were battling for the last remaining places via play-offs.

Fight
In the African qualifiers, Senegal advanced following a penalty shoot-out win over Egypt. The match at the Abdoulaye Wade Stadium in Dakar ended 1-0 to the hosts.

With the aggregate scores at 1-1, 30 minutes of extra-time was played.

But neither side could find the winning goal.
And just like in the Africa Cup of Nations final in Cameroon, Senegal claimed the penalty shoot-out courtesy of Sadio Mané's spot kick.

Ghana atoned for their disastrous campaign at the Cup of Nations. The Black Stars drew 1-1 with Nigeria in Abuja to advance on the away goals rule.

Thomas Partey scored for the visitors in the 11th minute and though Nigeria skipper William Troost-Ekong levelled mid-way through the first-half, the hosts could not break down the Ghana rearguard.

In Casablanca, Morocco overpowered Democratic Republic of Congo 4-1 to progress 5-2 on aggregate and Tunisia played out a goalless draw with Mali in Radès to qualify courtesy of their 1-0 victory last Friday in Bamako.

In Europe, Portugal disposed of Italy's conquerors North Macedonia 2-0. The Manchester United midfielder Bruno Fernandes scored in each half to steer Fernando Santos's men into the finals.

Poland saw off Sweden by the same score.