Egypt will defend with 16 players against Senegal, vows Queiroz 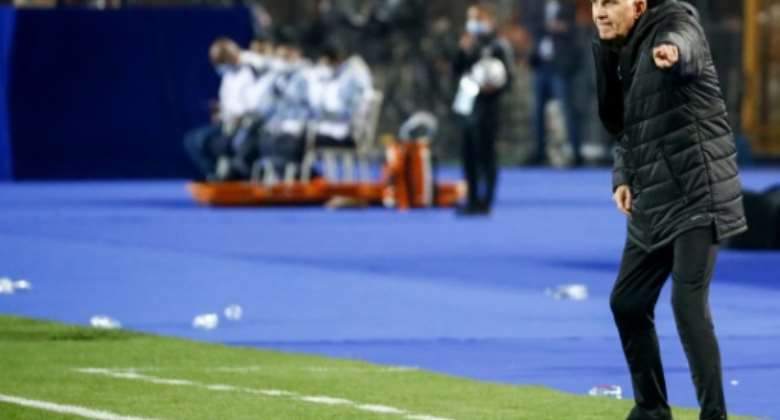 Egypt coach Carlos Queiroz instructs his players during the first leg of a World Cup play-off against Senegal in Cairo on March 25, 2022.. By Khaled DESOUKI (AFP)

Egypt coach Carlos Queiroz says his team "will defend with 16 players" when they protect a 1-0 lead over Senegal on Tuesday in the second leg of an African World Cup play-off.

"What I mean by 16 players is that each one must make the effort of two players, not just one player," said the Mozambique-born former Real Madrid manager and twice Manchester United assistant manager.

"We deservedly won the first leg against the best team in Africa and now we are going to Senegal to fight for every metre, every loose ball. Every Egyptian must double his efforts."

A play-off that pits Liverpool stars Mohamed Salah of Egypt and Sadio Mane of Senegal against each other is a repeat of the recent Africa Cup of Nations final, which Senegal won on penalties after a 0-0 draw.

Here, AFP Sport looks ahead to the second legs on Tuesday that will decide which five African teams go to the 2022 World Cup in Qatar.

Senegal coach Aliou Cisse says he does not want to see supporters wearing suits in the recently completed Stade du Senegal near Dakar when they confront Egypt.

"We need more fanaticism when it comes to supporting our national team, like they do in Egypt and other north African countries," he says.

"Those who wear suits to football matches must give their tickets to Senegalese supporters who wear football jerseys. We want to see only green, yellow and red (national flag colours) in the stands."

The outcome could hinge on Egypt snatching an 'away' goal -- if they do Senegal will face the mammoth task of scoring at least three times to qualify.

New Ghana coach Otto Addo is optimistic that the Black Stars can reach the World Cup despite being held 0-0 at home by Nigeria in the first leg.

"The pressure if off us and on them," he believes. "It was crucial that we did not conceded at home and any score draw in the return match takes us through.

"Our players recovered superbly from a terrible Cup of Nations campaign in January, matched Nigeria throughout the 90 minutes and created more scoring chances."

Star Nigeria forward Victor Osimhen admits the pressure is on the Super Eagles, saying "this match is about much more than football -- the nation is relying on us to triumph".

Cameroon coach Rigobert Song (C) consoles his players after losing to Algeria in the first leg of a World Cup play-off in Douala on March 25, 2022.. By Daniel BELOUMOU OLOMO (AFP)

The captain has been battling a heel problem and was taken off at half-time of the first leg in Douala, which Cameroon lost 1-0 with Islam Slimani nodding the match-winner off a late first-half free-kick.

"We are sure Vincent will be available," said Song, hoping the skipper, and fellow attackers Eric Maxim Choupo-Moting and Karl Toko Ekambi, can turn the tables.

It is a tall order as the match is set for Blida, 50 kilometres (30 miles) southwest of Algiers, and the Stade Mustapha Tchaker is called the "slaughterhouse" because Algeria regularly win handsomely there.

The Bosnian coach was walking a tightrope by refusing to choose Chelsea winger Hakim Ziyech and Ajax Amsterdam full-back Noussair Mazraoui after a quarter-finals exit from the recent Cup of Nations.

When Halilhodzic attended a recent Wydad Casablanca match, many in the crowd chanted support for Ziyech, who the coach considers a "disruptive influence".

But after a poor start in the Democratic Republic of Congo, where they conceded once and could have trailed by three goals, Morocco missed a penalty and then equalised to force a 1-1 draw.

Sissako conceded an own goal on 36 minutes and was then sent off for a last-defender foul on Seifeddine Jaziri, which automatically rules him out of the return match.

Tunisia coach Jalel Kadri refused to accept that his team are almost there, however, warning his team that "the return match will be even more difficult".

Mali captain and defender Hamari Traore, a first-leg absentee due to a suspension, says "our players had sweat-soaked jerseys trying to stage a comeback last Friday. We have the means and will to succeed."