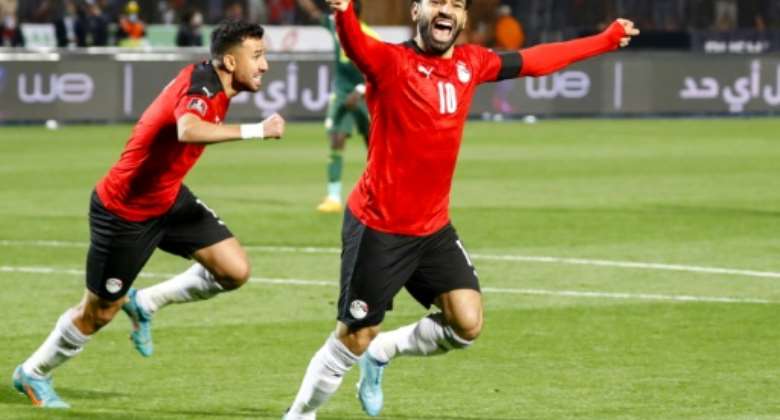 Prolific Liverpool scorer Mohamed Salah was the architect of the only goal as Egypt edged Senegal 1-0 in Cairo on Friday in a high-profile World Cup play-off first leg.

Salah turned inside the box and slammed the ball against the crossbar with the rebound hitting Senegal defender Saliou Ciss and rolling into the net for an own-goal.

The eagerly awaited clash was a repeat of the Africa Cup of Nations final last month, which Senegal won 4-2 on penalties in Cameroon after 120 goalless minutes.

It was one of three first legs decided by a solitary goal with Algeria winning 1-0 against Cameroon in Douala and Tunisia achieving a similar result against Mali in Bamako.

Ghana and Nigeria played a 0-0 draw in Kumasi and Morocco came from behind to hold the Democratic Republic of Congo 1-1 in Kinshasa.

The five second legs are scheduled for Tuesday and the aggregate winners will represent Africa at the World Cup in Qatar from November 21.

Nigeria had to settle for a 0-0 draw in Ghana after VAR overruled a decision to award the visitors a penalty.

A review of the decision in the closing stages of the west African showdown found that Ghana midfielder Iddrisu Baba was fouled before he handled.

Ghana came closest to breaking the deadlock with Nigerian goalkeeper Francis Uzoho pulling off a superb save to deny Fatahu Ishaku in the first half.

Slimani, 33, soared in a crowded goalmouth to head a Youcef Belaili free-kick powerfully past goalkeeper Andre Onana into the roof of the net.

Even 11 minutes of added time could not bring Cameroon an equaliser and they must win in Blida to avoid missing successive World Cups.

Cameroon hold the record for World Cup appearances by an African nation with seven and have not missed two in a row since first qualifying in 1982.

Success was particularly sweet for Algeria as they fared disastrously in the Atlantic port city of Douala when defending the Africa Cup of Nations title two months ago.

Algeria began the tournament boasting a 34-match unbeaten record only to draw with Sierra Leone and lose to Equatorial Guinea and the Ivory Coast to make a humiliating first-round exit.

Mali defender Moussa Sissako conceded an own-goal and was sent off within four minutes as they lost 1-0 to Tunisia.

Under pressure from Seifeddine Jaziri, Sissako pushed the ball toward his own goal on 36 minutes, unaware that goalkeeper Ibrahim Mounkoro had strayed off his line, and the ball landed in the net.

When Sissako committed a last-defender foul on Jaziri soon after he was shown a red card and although Mali created the better second-half chances, they failed to convert any into goals.

Mali gave a first cap to France-born Everton midfielder Abdoulaye Doucoure, who had long hoped to play for his country of birth before agreeing to represent the homeland of his parents.

Tarik Tissoudali scored a brilliant equaliser as Morocco moved closer to a sixth World Cup appearance by drawing with the Democratic Republic of Congo.

A move that began with a superb slide tackle by Moroccan defender Romain Saiss ended with Tissoudali rifling the ball into the net on 76 minutes.

Yoane Wissa had given DR Congo a 12th-minute lead, sprinting down the wing, cutting inside and unleashing a shot from just outside the box that brushed Saiss and beat goalkeeper Yassine Bounou.

With away goals counting double if teams finish level on aggregate, a 0-0 draw in Casablanca would take Morocco to Qatar.

Morocco were unsettled after falling behind and Cedric Bakambu and Dieumerci Mbokani wasted chances to put the Congolese further ahead lead on a gloomy and windy evening.

The visitors squandered an early second-half chance to equalise when Ryan Mmaee blazed a penalty over the crossbar.

DR Congo were reduced to 10 men with five minutes remaining when Ngonda Muzinga was sent off after being yellow-carded twice. He will miss the return match.