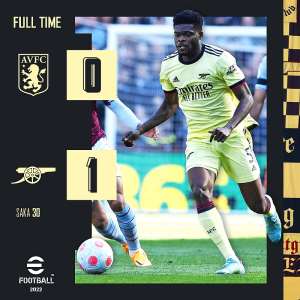 Ghana international, Thomas Partey continued his fine form on Saturday afternoon as he excelled in the midfield of Arsenal to help the team to cruise past Aston Vila with a 1-0 win.

The midfielder and his team today played as guests to the matchday 29 opponent of the English Premier League at Villa Park.

Keen on returning to winning ways after losing to Liverpool the last time out, Arsenal set up strong against Aston Villa, with Mikel Arteta pairing Granit Xhaka and Thomas Partey in the middle of the field.

The Ghanaian with the chance to play today, put up an impressive performance as he lasted the entire duration of the encounter.

In the end, the Black Stars asset earned a 7.2 rating according to data provided by SofaScore.

On the matchday today, Bukayo Saka scored in the 30th minute to shoot Arsenal into the lead. Despite a spirited performance from Aston Villa in the second half, the team could not score and had to succumb to the defeat at the end of the 90 minutes.