Player to Watch: Boakye leads the line for Ghana 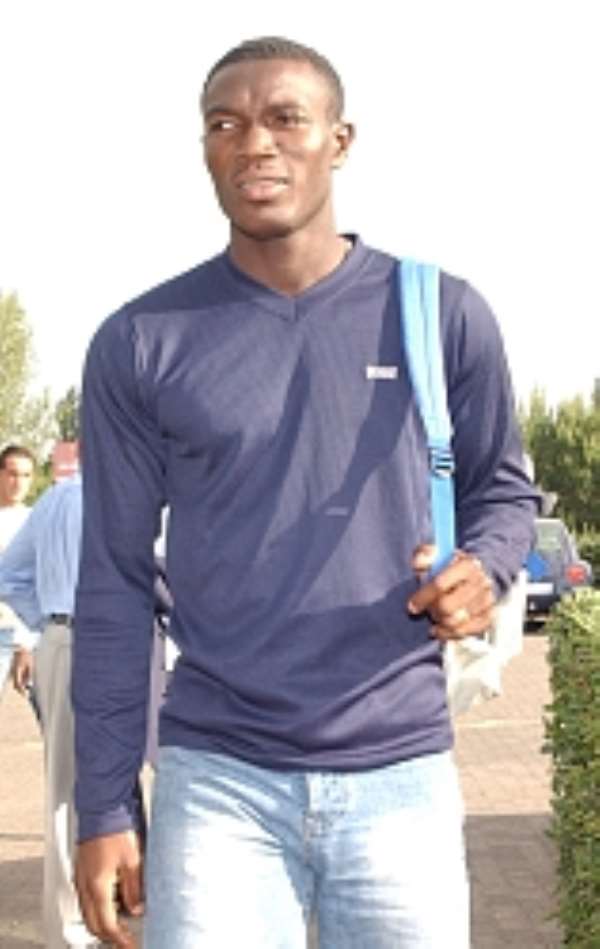 Ghana's Black Stars have won the African Cup of Nations four times but have inexplicably never managed to reach the finals of the FIFA World Cup™. One of the young Ghanaians bursting with talent and determined to get his nation to the world's showpiece event for the first time is powerful striker Isaac Boakye.

With many of his compatriots scattered throughout Europe's top leagues and clubs, the 22-year-old has elected to stay with unfashionable Arminia Bielefeld in the 2.Bundesliga and keep his eyes squarely focused on Ghana's big prize -- the 2006 FIFA World Cup. In the meantime, his environs are suiting him just fine, particularly as his team sit atop the second division table and could well be in the top flight next season.

“My first year here in Germany has been nice,” Boakye told

FIFAworldcup.com. “I'm very happy to start my career here, and I hope to get the chance to play in the 1.Bundesliga soon. Bielefeld is doing well now, and the football is very competitive. That's good for me.”

Competitive perhaps but the bustling Kumasi native has been having little trouble finding the net in Germany. The 1.82m-tall forward has managed to score 10 times in his 20 clubs matches despite being the primary focus of opposition defences. His record for his country is slightly off that pace -- five goals in his first 15 caps. Helping the Black Meteors fly Boakye had just returned from Ghana where he had led the line for the Olympic team in a 2-0 victory over Zambia. Though he did not score and was substituted early in the second half, the victory for the Black Meteors was enough to see them through as one of three African representatives at the Olympic Football Tournament in Athens.

The qualification has been a shot in the arm to Ghanaian football supporters, who were more than a little upset when the team failed to qualify for the African Championships for the first time since 1990 after finishing behind Rwanda. Boakye and his younger mates are now being looked to for a first ever trip to the finals, but the player who made his international debut in 2001 against Zimbabwe knows that the road is long and hard.

“Right now Ghana is far away from the best teams in Africa,” said the forward honestly. “Ghana was down for a long time. We didn't qualify for the African Cup of Nations in Tunisia this year. But, we've qualified for Greece, so I don't know how to rate Ghana right now. There is a lot of work still to do, for us, the players, the officials and the management.” Knowing the Squirrels Boakye did his part to right Ghana's ship with two brilliant goals in the 5-0 demolition of Somalia in the first round of FIFA World Cup qualifying in Africa. The Black Stars won the tie easily 7-0, but are now drawn in a difficult Group 2, along with South Africa, Congo DR, Burkina Faso, Uganda and the Cape Verde Islands. They start off with an awkward away trip against the Squirrels of Benin in Ouagadougou.

“I know the team of Burkina Faso a little bit from the last time we played them in the African Cup of Nations in Mali 2002,” remembered Boakye, who scored two goals in two minutes of injury time to beat Burkina Faso in that match. He also scored the match winner against Zimbabwe in qualifying that got Ghana to the tournament in the first place. Burkina Faso drew with Senegal in this year's tournament in Tunisia, so they are no team to look past.

“They have a good team, and we cannot underestimate them,” continued Boayke. “They have no big names in the side, but they play well together.”

Ghana will surely be favourites going into the match, but like many African players Boakye has learned that doing well in the always contentious qualifying competitions takes more than mere talent.

“If you do not prepare well, you are not going forward,” he said forcefully. “If you build the house, you have to lay the foundation before. If you don't have a good foundation, you are nothing … But, we as players cannot let the house down either.”