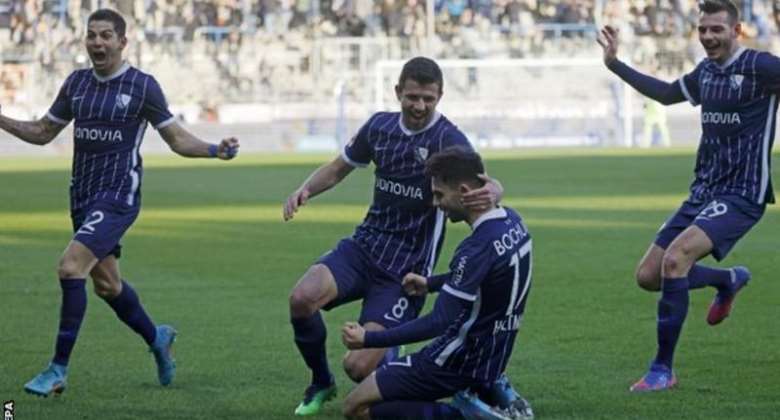 Bochum's previous win over Bayern Munich was in February 2004

Bochum stunned leaders Bayern Munich as the defending champions conceded four goals before half-time in a Bundesliga match for the first time since 1975.

Robert Lewandowski gave Bayern an early lead, only for Christopher Antwi-Adjei to draw the hosts level soon after.

A penalty by ex-Brighton striker Jurgen Locadia then sparked a burst of three goals in six minutes before the break.

Cristian Gamboa and Gerrit Holtmann were also on target before Lewandowski pulled one back late on.

That was not enough to avoid a fourth loss in 22 league games this season for Bayern, who are nine points clear at the top before second-placed Borussia Dortmund visit Union Berlin on Sunday.

Bochum returned to the German top flight this term after an 11-year absence and came into the game 11th in the table, without a win in three league games.

But they celebrated their first win over Bayern in 18 years, allowing them to gain some revenge for the reverse fixture in September.

Bayern led 4-0 at half-time before going on to claim a 7-0 win - their biggest in the league so far this season.

The last time Bayern conceded so many by half-time in the league was during a 6-0 loss at Eintracht Frankfurt in November 1975.

Burundi's Gatumba massacre offers a window into the past and...
13 minutes ago