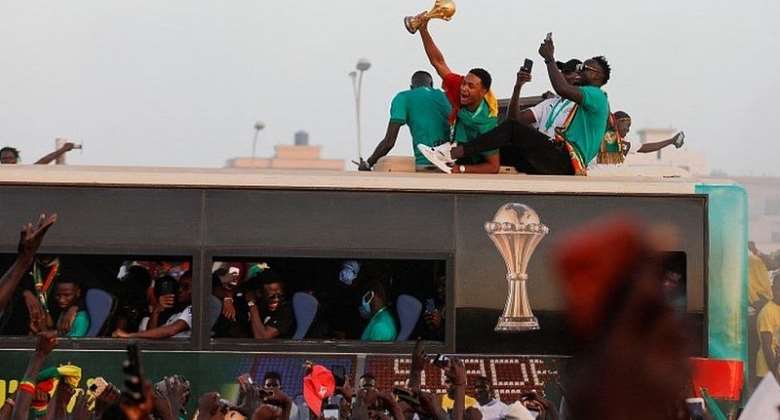 Senegal's football team have been given a hero's welcome upon their return home after winning the Africa Cup of Nations for the first time.

Tens of thousands of ecstatic revellers celebrated the players' return to Dakar, sitting on top of cars and dancing in the capital's streets.

President Macky Sall was among those greeting the team at the airport.

When coach Aliou Cissé raised the trophy cup from the roof of the team's victory bus, crowds cheered in delight.

"It's a street party. I don't think Senegal has ever seen anything like it," the BBC's Emeline Nsingi Nkosi said.

Players were transported inside and on top of a coach along a packed parade route to the centre of Dakar.

One of those among the crowd was 17-year-old student Die Mbaye who described it as an unforgettable moment that will last forever.

"We deserved it, we have been waiting for 60 years," she told AFP news agency while wearing the Senegalese flag in her hair.

The celebrations began straight after the final whistle on Sunday night, seconds after Liverpool's Sadio Mane sealed the historic victory over Egypt on penalties.

People poured on to the streets of Dakar, dancing and firing fireworks into the air.

The authorities proceeded to declare Monday a national holiday.

Image caption: Senegal has declared February 7th 2022 a national public holiday to celebrate its first ever victory at the Africa Cup of Nations

Image caption: The victory bus paraded the national team from an airport to the centre of Dakar, Senegal's capital of three million people

Image caption: The African Renaissance statue park where tens of thousands of Senegalese gathered to watch their team beat Egypt

"We waited a long time. [The cup] is finally here. We really needed it," ecstatic fan Modou Ba, 25, told the AFP news agency.

There were also scenes of jubilation in the French capital, Paris, home to a large Senegalese community. Thousands of celebrating supporters gathered at the Arc du Triomphe.

The winning penalty was scored by Sadio Mane, who shared this photo of him in bed with the trophy, wearing a winners' medal.

President Sall cut short a foreign tour to hold an official reception for the African champions on Tuesday.

Senegal have narrowly lost two previous finals, in 2019 and 2002, and were favourites to win the tournament this year.