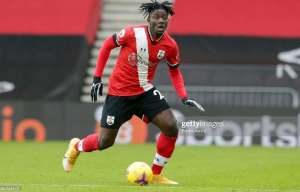 Mohammed Salisu has agreed to feature for Ghana in their 2022 Fifa World Cup playoff against Nigeria in March.

The Black Stars, who had a poor tournament in Cameroon will host their rivals, the Super Eagles as both teams aim to qualify for the global showpiece in Qatar.

Salisu, who plays for Southampton in the Premier League has rejected several calls to feature for the country.

He has previously rejected a call up by Kwesi Appiah and CK Akonnor and ahead of the 2021 Africa Cup of Nations [AFCON] in Cameroon, the former Real Valladolid centre back turned down another call-up.

Speaking on the subject, the player’s uncle, Yakubu Ahmed said Salisu has informed the family of his decision to finally play for the national team.

“He will be playing for Ghana soon. He has assured us that he will play in the World Cup qualifiers,” Yakubu Ahmed told Kumasi-based Sikka FM.

“He cleared the air about his absence in the AFCON but assured of availability for the World Cup qualifiers.”

Salisu is currently one of the best young players in Europe, having made an impressive start to the season at Southampton.

He has taken the Premier League by storm after starring in matches against Manchester United, Arsenal and recently Manchester City.