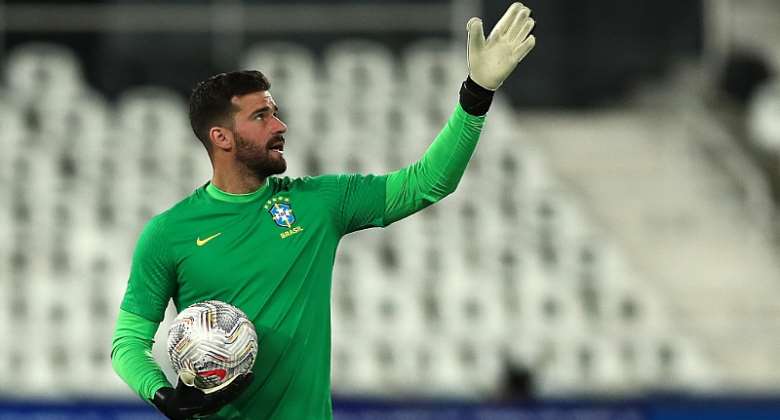 Alisson said the Video Assistant Referee (VAR) had prevented his side from being "punished unfairly" after the Brazil goalkeeper had two red cards rescinded in Thursday's 1-1 draw with Ecuador in a World Cup qualifier.

Alisson was shown a red card after 25 minutes for a fierce tackle and another in stoppage time for felling Ayrton Preciado as he attempted to punch the ball, but on both occasions, the referee consulted VAR and changed his mind.

"I think this was the first time this has happened in the history of football," the Liverpool keeper said.

"I think that I acted properly in the moves and I think my teammates helped me a lot, they were incisive in their complaints to the referee. This shows once again the importance of using VAR in football.

"I am happy with the VAR, if it wasn’t for the VAR we’d have been punished unfairly."

Brazil took an early lead through Casemiro and both sides had already been reduced to 10 men when Alisson was shown his first red card.

Felix Torres equalised for the home side with a header 15 minutes from time and then Alisson was again at the centre of controversy in stoppage time as Ecuador pushed for a winner.

The Colombian referee, who had also rescinded a penalty award for Ecuador after consulting VAR, overturned the goalkeeper's second red card to the fury of the home fans.

"I think the draw was a fair result because neither of the two teams created sufficient chances to say it wasn’t a fair outcome," Alisson told reporters.

"(Coach) Tite asks us to be mentally strong on the pitch, to let the referee make the decisions and for us to trust in our own work.

"But in that sense, today it was a game that was mentally really difficult. We were mentally very strong, and I think when we had to question the referee we did so at the right times.

"And VAR was used and we need to underline how important that was because these decisions change the game.”

Ecuador, who are third in the 10-team South American qualifying group, now have 24 points, five ahead of fourth-place Uruguay with most teams having three games still to play.

The top four qualify automatically for Qatar and the fifth-placed team go into a playoff with a nation from the Asian confederation. Brazil and Argentina have already qualified.