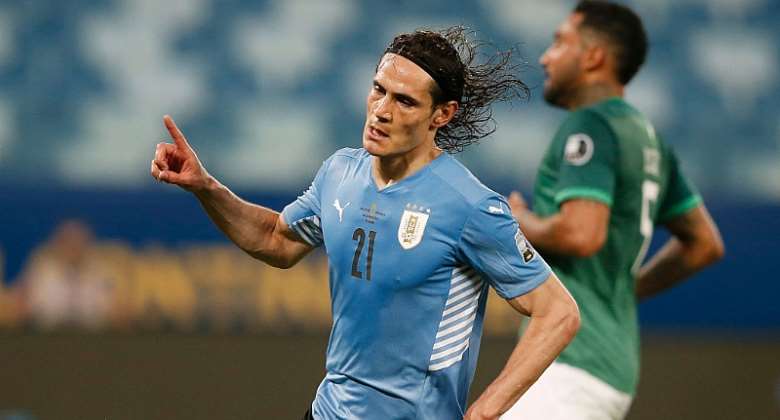 With Brazil and Argentina already qualified, seven nations are battling it out for the final two automatic qualifying spots with just four matches remaining.

Right now Suarez and Cavani's Uruguay and Sanchez's Chile are both sitting a point outside the crucial fourth spot held by Colombia.

"Many times in the qualifiers we've had to get out the calculators," said Cavani when he arrived in Uruguay on Sunday after his crucial assist in Manchester United's 1-0 win over West Ham a day earlier.

"Other times it's been a bit calmer but that's the way it is: difficult. We can't afford to drop points and need to get as many as possible."

Uruguay are currently seventh and have changed coaches since the last round of matches in November.

After a record-breaking 15 years at the helm, iconic veteran coach Oscar Tabarez was fired following a disastrous fourth straight qualifying defeat in which Uruguay conceded 11 goals and scored just one.

Diego Alonso will take charge of the team for the first time in a bid to negotiate the tricky path towards Qatar.

Twice former winners, Uruguay have not failed to qualify for the World Cup since 2006.

Uruguay travel to Paraguay on Thursday before hosting Venezuela -- the only team in the single 10-nation qualifying group with no realistic hope of reaching Qatar -- on 1 February.

But they are not the only ones sweating.

Third-place Ecuador are well set to join the continent's two heavyweights, sitting six points ahead of the chasing pack.

The next five teams are separated by just two points.

Chile will be without some crucial players for their two matches in the coming week.

Midfield enforcer Arturo Vidal is suspended after a red card in their last match -- a 2-0 home defeat to Ecuador -- and Chile received further bad news with three players ruled out of Thursday's visit of Argentina after testing positive for Covid.

Watford center-back Francisco Sierralta is in quarantine in England while midfielder Mauricio Isla and forward Jean Meneses both tested positive upon arriving in Santiago.

Chile will travel to Bolivia -- a point behind them -- on 1 February.

Ecuador could secure their place in Qatar by this time next week if results go their way.

They host Brazil, who are without the injured Neymar, on Thursday before a trip to Peru five days later.

"We're close but we still lack the hardest thing which is closing it out, because we have some tough games ahead," said Ecuador's Argentine coach Gustavo Alfaro.

They must also play Brazil in Quito behind closed doors due to coronavirus restrictions in the country, although the Ecuadoran Football Federation has submitted a last-ditch request to authorities to allow fans in the Rodrigo Paz Delgado stadium.

Colombia, Peru and Bolivia are amongst the six teams separated by two points with Paraguay a further two points adrift and needing to make up some ground after seven draws in their 14 matches.

Only Venezuela, looking ahead to the 2026 World Cup under new coach Jose Pekerman, and the top two -- Brazil and Argentina -- have nothing to play for.

But even though Paris Saint-Germain teammates Neymar and Argentina's Lionel Messi have been left back in Europe, neither side will be expected to take their remaining matches lightly.

"In the few matches that remain, no coach is going to do a lot of experimenting," Brazilian commentator Paulo Calcade of the Disney sports channels told AFP.

"They need to have certain convictions and to work on those, and I think that's what (Brazil's) Tite and (Argentina's Lionel) Scaloni will do.

"They believe in a tactical format without or without Messi and Neymar."