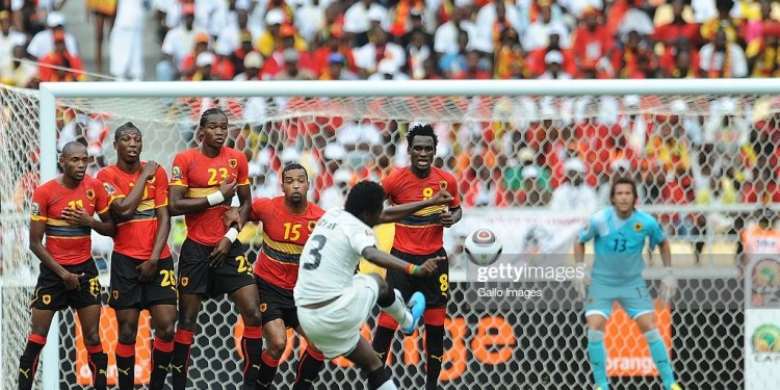 ANGOLA, LUANDA - JANUARY 24: Asamoah Gyan of Ghana kicks a free kick while Angola players looks on during the Africa Cup of Nations Quarter Final match between Angola and Ghana from the November 11 Stadium on January 24, 2010 in Luanda, Angola. Photo by Lefty ShivambuGallo ImagesGetty Images

Angola tasted defeat after wasting several golden opportunities and ultimately a first-time spot in the Africa Cup of Nations’ semi-final.

The Palancas Negras stumbled against the four-time winners of the competition (1-0), which, despite the absence of star Michael Essien, bettered the host country.

The build-up to the match had been dominated by claims from the Ghana Football Association of “intimidatory” tactics by Angolan security forces designed they say to destabilise the team. If these allegations were true, the tactic proved ineffectual.

The young Black Stars team faced a hostile crowd at the November 11 Stadium, as Angolans noisily rallied behind their national team. The Palancas Negras created the early opportunities, emboldened by the feverish support of the home crowd.

But Ghana rained on that enthusiasm when Stade Rennes striker, Asamoah Gyan, outmanoeuvred defender Kali, to slot the ball past the Angolan keeper in the 16th minute.

Forced to play on the offensive, Angola doubled their efforts, but consistently came up short. Ghana maintained their defensive positions and resisted the offensive until the final whistle.

Other AFCON fixtures on 24 January