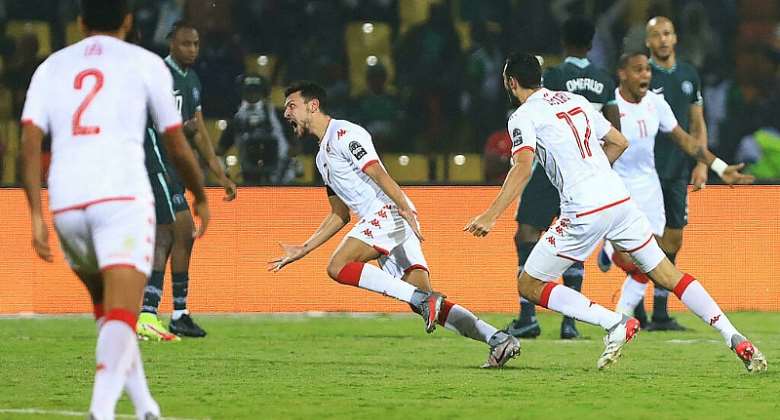 Tunisia advanced to the last eight of the Africa Cup of Nations on Sunday night following a tactically disciplined 1-0 victory over Nigeria.

After a chess-game of a first half with few clear openings, the match in Garoua flashed into life after the pause.

Within a minute of the restart, Tunisia skipper Youssef Msakni opened the scoring with a long range shot that Nigeria goalkeeper Emil Okoye should have kept out.

And then substitute Alex Iwobi was given a red card for a challenge on Msakni. The Everton player had been on the pitch at the Stade Roumdé Adjia for six minutes.

Change
After that the Nigerians lost their composure and the Tunisians could  could have made them suffer even more straight away.

Hamza Rafia was set free down the right and unleashed a shot from a tight angle rather than passing to the unmarked Msakni on the left.

Rafia was withdrawn soon after for fresher legs and perhaps a fresher mind. Naim Sliti slotted in on the right and provided part of the defensive cover aimed at stifling the Nigerian wingers Moses Simon and Samuel Chukwueze.

"They formed a low block and we were slow in the transition between midfield and attack," said Nigeria coach Augustine Eguavoen. "And that gave them time to recover and double up on those two,"

Nigeria failed to find the way to goal through midfield and by the time Sadiq Umar brought his ranginess to the forward ranks, the Tunisians were entrenched.

Fight
"I said before the match that we didn't have 28 players but 28 soldiers," beamed Tunisia assistant coach Jalal Kadri.

"To win big matches, you need competitors and that's what we had. I want to congratulate them all ... even those who were out with Covid.

"Nigeria were a worthy adversary but I believe our victory was merited."

The win overturned the form book. Nigeria ntoched up victories in all three of their games in the group stages while Tunisia scraped through to the last 16 after finishing as one of the four best third-placed teams.

The Tunisians will play Burkina Faso on 29 January in Garoua after they got past Gabon following a penalty shoot-out.

Bookings
The match in Limbé was a feisty affair with 13 yellow cards and a Gabonese dismissal.

Burkinabe skipper Bertrand Traoré gave his side the lead in the 28th minute, 10 minutes after missing a penalty.

Gabon's equaliser came in stoppage time when  Adama Guira put into his own net.

Burkina Faso had a chance to claim the shoot-out when Gabon's Yannis N'Gakoutou fluffed his penalty. But Abdoul Fessal Tapsoba returned the favour.

However, Gabon's Lloyd Palun missed his kick and Ismael Ouedraogo made him pay the price for his lack of precision.