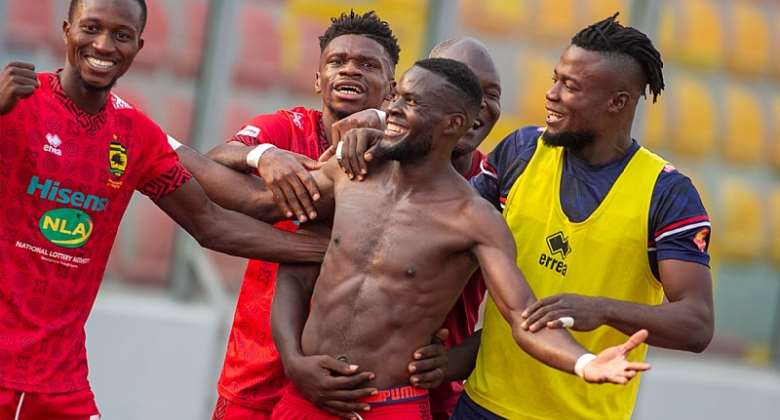 Asante Kotoko cruised to a narrow victory against Medeama SC on Sunday afternoon thanks to a fantastic strike from attacker George Mfegue.

The Porcupine Warriors last weekend were held to a goalless draw by Berekum Chelsea in a matchday 14 encounter of the ongoing Ghana Premier League season.

Today at the Baba Yara Sports Stadium, Asante Kotoko hosted Medeama SC to battle for points on matchday 14 of the campaign.

The game tipped to be a difficult contest for both sides lived up to expectations with the Reds struggling to keep the team from Tarkwa at bay.

Fortunately, the resilience displayed by the Asante Kotoko team paid off in the second half after a goalless draw first half.

In the 78th minute, striker George Mfegue won possession close to the Medeama SC area and decided to go on a solo run.

Having succeeded to get into the area, he unleashed an unstoppable effort that found the back of the Medeama SC net to give Asante Kotoko the lead.

With the visitors failing to find an answer, the Reds held on to amass the maximum points at full time.

Courtesy of the result, Asante Kotoko are now seven points clear at the top of the Ghana Premier League table.