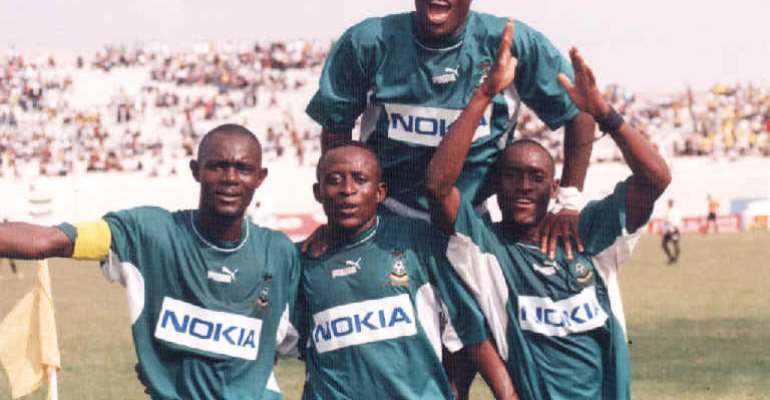 Kumasi Asante Kotoko, the 2003 Premier League Champions have set their eyes on three key players of their city rivals, King Faisal to beef up their squad for the 2004 soccer season. Alhaji Abdul Karim Grunsah, Founder and Chairman of Faisal who revealed this to the GNA Sports in an interview on Tuesday said he had received a letter from Kotoko to that effect.

He mentioned the players as Abubakri Yahuza, Kwadjo Poku and Prince Antwi.

Alhaji Grunsah denied reports that Yahuza and Poku have signed for Kotoko adding that, the former signed for Faisal on Monday while the latter is still having a three-year working contract with Faisal and would soon leave for Switzerland to embark on trials.

According to Alhaji Grunsah, he would only enter into negotiations with Kotoko on two conditions; that all monies owed him following the transfers of Frank Osei and Yussif Chibsah are settled and if Kotoko are ready to pay the money, he would then quote for the three players. He expressed his readiness to release the three players to Kotoko if his demands are met, adding that there are equally good players from his junior team to take the place of the three players.

Alhaji Grunsah said he had made provisions for the departure of any player from his team and the absence of the three players would not affect his performance in the coming season.

In a related development, reports reaching the GNA sports reveal that Kotoko have also expressed interest in some key players of Liberty Professionals and have forwarded letters to them for negotiations. The players are William Tierro, Asamoah Gyan, George Yamoah, Sam Addo and Issifu Ansah.

The 2003 champions would be one of the nation's representatives in this years CAF Champions league.

Police scale up security in Accra to hunt for heavily armed ...
12 minutes ago